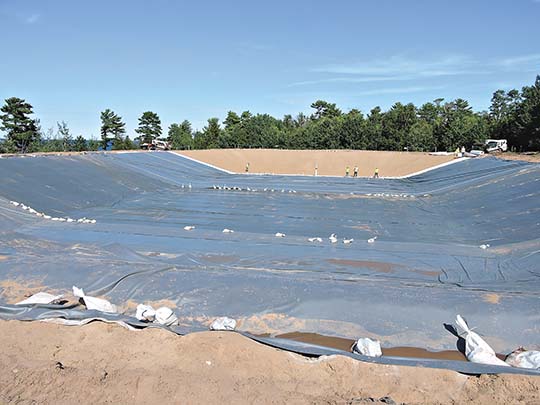 The entire liner has been removed, the under-drainage and plumbing underneath has also been removed and replaced, he said, the basin has been leveled, and installation of the new liner began Monday.

“They’ll be here, probably through Wednesday,” Stigers said in reference to the company conducting the installation.

The project is being paid for through the State Revolving Fund (SRF), Stigers said. MJO Contracting is the project contractor, and OHM is the engineering firm.

The SRF, or Michigan Water Pollution Control Revolving Fund, is a low-interest loan financing program that assists qualified local municipalities with the construction of needed water pollution control facilities. Rates are 2 percent for a 20-year loan, and 2.25 percent on 3-year loans in fiscal year 2019. 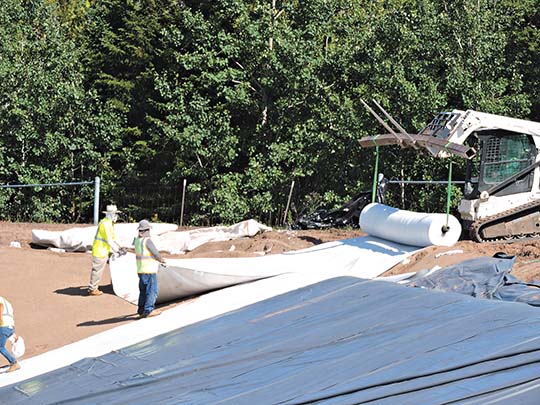 Graham Jaehnig/Daily Mining Gazette As reconstruction of the primary wastewater treatment system primary lagoon in Grant Township progresses toward completion, workers remove a layer of the new liner from a spool to lay on top of the sand beneath.

Once the primary lagoon’s repairs are completed, Stiger said, the secondary lagoon, which is currently being used, will receive the same repairs. The secondary lagoon has shown no signs of failure, but repairing it has been recommended as a precautionary measure.

“The thought was because of the failure of the liner in the primary lagoon that a failure was imminent in the second lagoon,” said Stigers. “It hasn’t happened yet, but they wanted to go ahead and re-line the secondary lagoon.”

Repairs of the lagoons came as a result of a March 2018 failure of the primary lagoon’s liner, which resulted in a decrease in the lagoon’s level. The failure occurred on the weekend of March 3, and on the following Monday, the Department of Environmental Quality, the Wester Upper Peninsula Health Department, and OHM Engineering firm were contacted.

The DEQ was quick to investigate the situation, but efforts were initially hampered by an enormous amount of snow and ice on the lagoon’s surface.

Upon discovery of the issue, all influent was directed into the secondary lagoon.