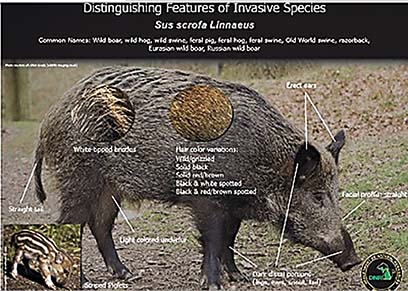 www.michigan.gov/images A photograph of a swine declared by the DNR to be an invasive species, placed on the DNR’s Invasive Species Order in 2010. The subject of a seven-year court battle between Baraga County pig farmer Roger Turunen and the DNR, the dispute was heard in the Michigan Court of Appeals, remanded back to Circuit Court, and was was decided upon last Thursday.

The DNR’s ISO, which, prohibits certain breeds of pigs, was unconstitutionally vague when the DNR applied it to the Turunens’ situation, because it failed to provide fair notice of what, specifically, could cause a pig to be classified as illegal, and because the ISO impermissibly encouraged arbitrary and discriminatory enforcement by DNR officials. The court also ruled that regardless of the unconstitutionality of the law, the DNR had failed to prove that any of Turunen’s pigs were prohibited by the ISO.

The DNR has asserted, since 2012, that Turunen possessed illegal animals, and should be subject to sanctions. According to the ruling, the court disagreed.

Prior to the DNR categorizing eight of Turunen’s pigs as illegal, the ruling states, this court granted a preliminary injunction to Turunen that permitted and authorized him to continue to raise and market pigs during the period of litigation.

“The DNR cannot, in any way, sanction Mr. Turnenen for conducting his business in compliance with a valid and effective court order,” stated Judge Charles Goodman in the ruling.

The DNR never provided Turunen any indication of the number of traits exceeding one that might distinguish a legal pig from an illegal one, the ruling states, and Turunen could only guess what a DNR examiner might conclude when examining his pigs. Further, Turunen was not provided with the required fair notice as what specifically could cause a pig to be classified as illegal.

“To give fair notice, a statute must give a person of ordinary intelligence a reasonable opportunity to know what is prohibited or required,” states the ruling. “It may not use terms that require persons of common intelligence to guess at their meaning and differ as to their application.”

Concerning Turunen’s pigs (eight in question), the ruling states, the evidence offered by the DNR would support only a finding that each pig was, at best, a Russian bore hybrid, meaning that each animal would be a cross between Russian boar stock and a domestic pig.

“As such, Mr. Turunen’s animals would exhibit less than all of the traits which the DNR associates with Sus Scrofa,” the ruling states. “Mr. Turunen’s pigs, therefore would not mirror the pure Russian boar shown on the (DNR’s) website…and thus, a pig could be ruled prohibited if it had minimal resemblance to the animal depicted on the DNR’s website.”

In a press release from Joseph P. O’Leary, one of the Turunen’s attorneys, O’Leary stated that among other opinions, the court stated that the DNR failed to prove that any of the farmer’s pigs was prohibited by the ISO.

“The ISO, as applied to Mr. Turunen and his animals,” the ruling states, “was unconstitutionally vague.”

The court’s ruling should put an end to the DNR’s enforcement of this ridiculous regulation, said O’Leary, in his release.