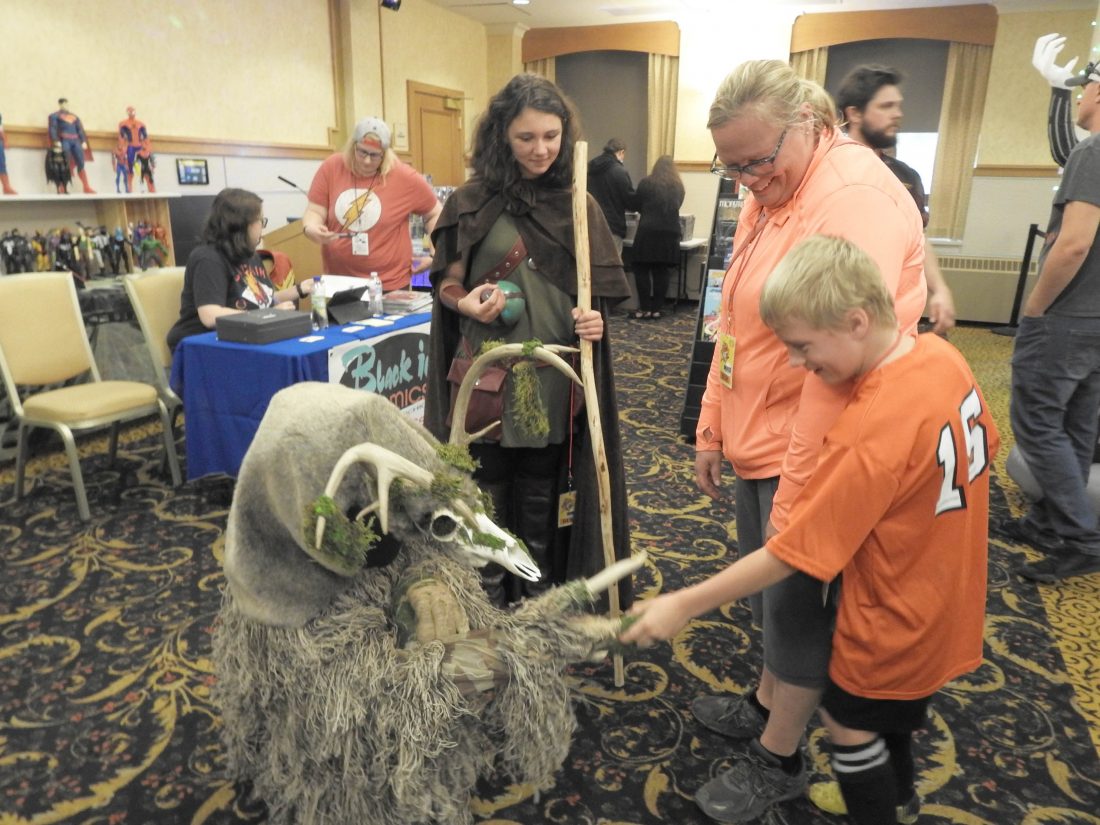 Fans of all stripes found something to pique their interest at the third annual Geek U.P., held at Michigan Technological University on Saturday.

“The energy has been really incredible,” said actress Patricia Summersett, co-founder of the convention and the host of a question-and-answer session later in the day (see related story). “It’s really nice to have a line of people and see people come back and see a bunch of new people coming from further and wider places.”

Comic artist Jerry Decaire gave a drawing tutorial to the crowd and took questions. Afterwards, he did on-demand drawings for visitors, his progress visible on a TV mounted in front. 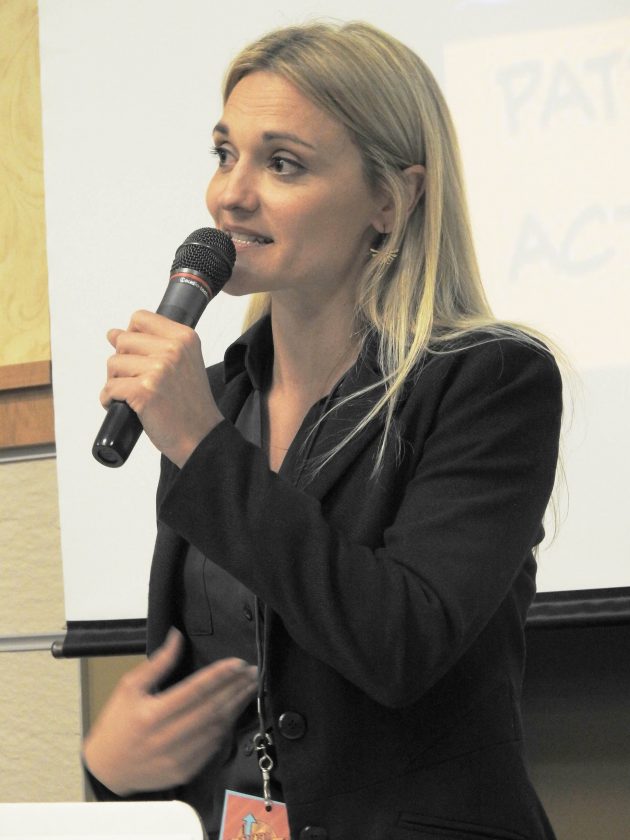 (Garrett Neese/Daily Mining Gazette) Patricia Summersett, whose credits include Princess Zelda in “The Legend of Zelda: Breath of the Wild,” talks to fans at the third annual Geek U.P. at Michigan Technological University Saturday.

Decaire, who went back to school as an adult for a biology degree, said there was a unfair perception of artists as “magical but stupid.”

Dean Haglund, best known for playing Richard “Ringo” Langly, one of the Lone Gunmen on “The X-Files,” entertained the crowd with stories of working on the show and other highlights from his career.

The Lone Gunmen appeared in 40 episodes during and its revival — partly because writers could speed up an overlong screenplay by bringing the Lone Gunmen to hack into a system.

Sometimes it meant getting new handwritten scenes from noted cyberpunk writer William Gibson at 4:30 a.m. Before “Triangle,” filmed as a continuous shot, he and the other Gunmen read lines to each other for four hours to prepare. 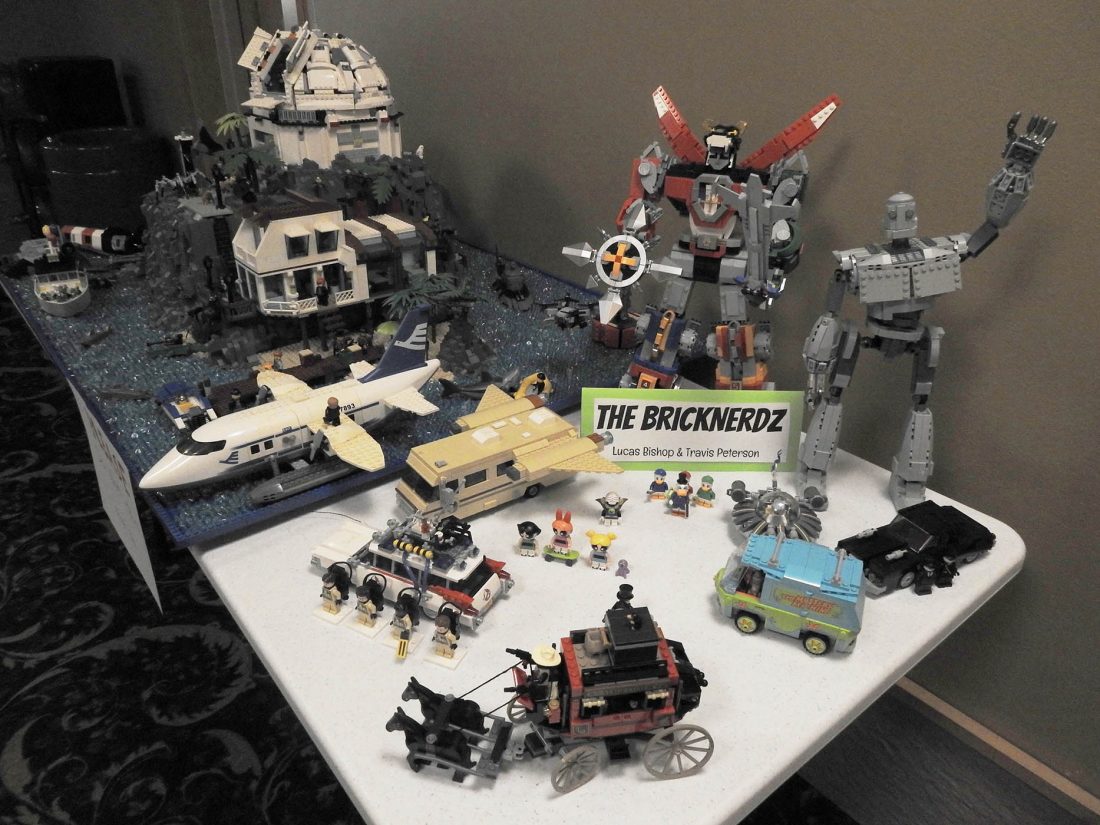 “There was a scene where the camera’s spinning around us four or five times, and it’s three Gunmen, and Gillian (Anderson), and we have all this information to unload on her, and we have to not screw it up,” he said.

They nailed it. One trick to long monologues, he said, is learning the last line first, then gradually building back.

A cosplay contest drew 24 entries, including Aquaman, Storm and Miffa, a queen from “The Legend of Zelda: Breath of the Wild.”

The winner was an original character — Ivy, a witch portrayed by Lela Walls, an eighth-grade student at Washington Middle School.

In addition to the cosplay, Walls likes talking to the artists displaying their work. That was also a highlight for Cooper Sheldon, a graduate student at Michigan Tech in industrial archaeology.

“I’ve seen a range of things, and I try to make sure everybody here who is an artist knows that their work is valuable, and needs to be appreciated,” he said.

Sheldon, who finished runner-up in the cosplay contest, spent a year off and on putting together his costume for a wendigo, a Native American spirit and the embodiment of gluttony. He gets to be a different person. And scaring people is fun, too, he said.

“It’s taken a while, but it’s a labor of love,” he said. “And at least you get to be a little bit different in this society where sometimes people prosecute you for being a little strange.”

While the ballroom saw the most activity, with anime films screening on the second floor and a Super Smash Bros video game tournament on the ground floor.

Cullen Downs of Marquette, who was at his second Geek U.P., said the convention had grown sizably even from last year.

“For a college town, this is perfect,” he said. “I’m from Marquette, so there are people coming from a good way away.”

The convention will continue to grow, said Travis Wakeham, one of the organizers. He was happy to see the range of attendees, whether children, college students or adults.

“It’s really cool seeing all these people coming together,” he said.