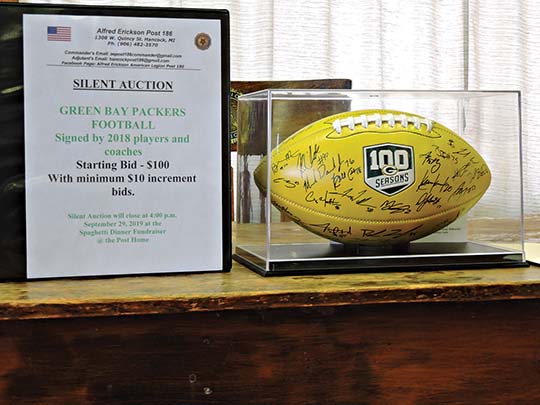 (Graham Jaehnig/Daily Mining Gazette) This Green Bay Packer Football, autographed by the 2018 team members, is just one of the items in the Alfred Erickson American Legion Post 186 Silent Auction. The silent auction is part of the post home’s capital campaign to raise money for upgrades to the post home. The auction closes on Sunday, Sept. 29 at 4 p.m. at the conclusion of the post’s spaghetti dinner fundraiser.

The Alfred Erickson American Legion Post 186 will hold a spaghetti dinner and silent auction fundraiser at the Post Home at 1308 West Quincy Street, Hancock, on Sept. 29, from noon to 4 p.m. Tickets for the dinner are $9 for adults, and $4 for children 12 and under.

The menu includes spaghetti with delicious sauce prepared by the legion members, along with salad, bread, coffee, juice, and homemade baked goods prepared by the Post 186 Auxiliary. Take-outs are available and tickets can be purchased at the door.

Proceeds from the dinner will go towards supporting the post, veterans, and community service.

New this year, Post 186 is holding a silent auction to raise funds for their capital campaign. After many years of supporting veterans, active military personnel and their families, and giving back to the community with Memorial Day services, Color Guard participation in parades, Boys State and American Legion baseball, few funds have been left over for the maintenance of the post home. The post, therefore, has started the capital campaign to raise funds for badly needed repairs and and improvements to help continue the post’s century-old tradition of service, into the next century.

Items to be auctioned in the campaign include:

• A Finlandia University football signed by the 2019 team members

• Complimentary tickets to an MTU hockey game or basketball game

• Plus, many other items from various donors, including:

Post Commander, Rod Guilbault, said the Post members have been selling tickets door-to-door, with fairly good results. This is one of two fundraisers the post conducts every year to generate revenue for the Post Home’s expenses.

“That serves, for the most part, keeping us open in the winter months and in the summer months,” said Gilbault.

The post will celebrate its 100th Anniversary of receiving its permanent charter in September, 2020. An Open House will be conducted in next fall to show case the Post’s history, and improvements made possible through the capital campaign.

For more information on the spaghetti dinner fundraiser, or the capital campaign, please contact Post Commander Rod Guilbault at 906-281-2050.