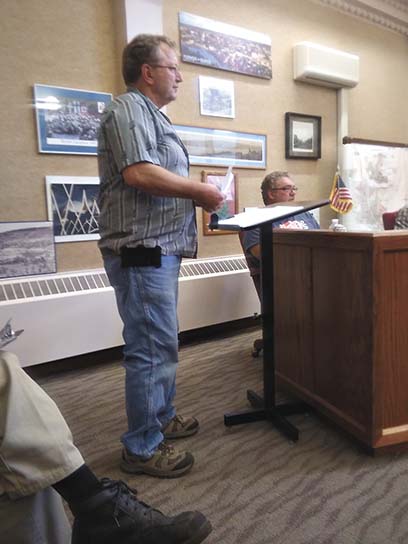 The Hancock City Council discussed a number of issues including complaints regarding the condition of area rental properties, a proposal to add a waterpark attraction to Hancock Beach, and a proposed water rate increase at their regular September meeting on Wednesday. The waterpark requires further discussion, and complaint notices have been delivered to tenants. Further, the proposed water rate was approved.

“We have a great water system, we want to keep it great,” said Mayor Paul Labine.

The city of Hancock gets its water from Adams Township, who recently made improvements to their water system. They subsequently raised Hancock’s water rates by approximately 30%. The city has also spent money on testing for water quality and improving some of the existing pipes within the city and is working on a control tower.

“We can’t control our water supply because it comes from Adams Township and they’re going to be doing another increase in January of about 9.5%,” said City Clerk Mary Babcock. “So we have to not only come out of deficit, but we also have to start putting some money away so that we can maintain the water system and taking off some of the capital improvement fund.”

Following the initial rate increase from Adams Township, the city of Hancock incurred a $150,000 deficit, which the city is required by the state to rectify.

The council had previously made attempts in the past to encourage citizens to decrease water usage. The results were effective and this year’s flow rates were down 14% from last year. However, this failed to correct the deficit. The council had previously discussed raising rates on gallons above a threshold based on the number of people in a home but elected to raise the standard rate by approximately 15%.

Councilor John Slivon pointed out that even after the rate increase, the cost of water remains less than one cent per gallon. The council estimates that the rate increase will cost the average household roughly $3.50 per month.

“It seems like some days we should have saved enough money we shouldn’t have to raise the rates,” said McClellan. “It would be my dream to come in here and see you guys saying your going to give us some relief rather than just raising the rates again.”

LaBine expressed hope that recently improved sewage infrastructure would allow the city to reduce sewage rates to compensate for rising water rates in the near future.