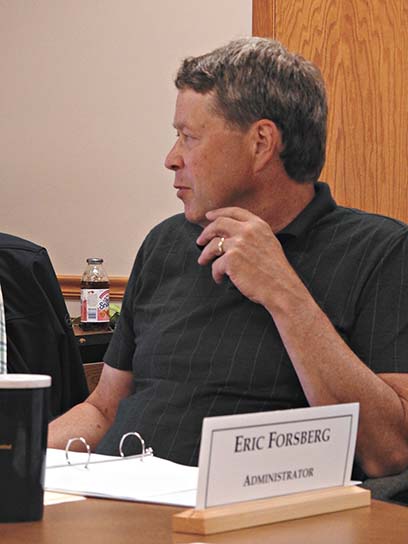 No members of the public commented at Tuesday’s hearing.

About 55% of revenues come from property taxes. What is slightly worrisome is that the county will only have estimated values for taxable value and inflation factors until July, he said.

About two-thirds of expenses are wages and benefits.

Very little of the budget spending is discretionary, Forsberg said. One exception is the sheriff’s department road patrol.

“Almost everything that we do is mandated by the state — clerk’s office, treasurer’s office, jail, courts, it’s all mandated,” he said.

The county will have a surplus of more than $60,000. However, the majority of that will go towards projects that have traditionally been funded through U.S. Department of Agriculture Rural Development grants, Forsberg said.

“This is the first time I’ve ever applied for funding for a patrol car and not gotten everything we asked for,” he said.

The county will spend $45,000 towards two Sheriff’s Department vehicles. Rural Development has been stretched thin by the number of flood and fire areas in the country, Forsberg said. Earlier this week, Rural Development announced it would provide $150 million for communities recovering from a variety of natural disasters.

The county’s law enforcement committee gave the department the go-ahead to buy the cars last week. The department puts on about 90,000 miles per year for each car, Forsberg said.

Houghton County also takes in money as the fiduciary agent for Homeland Security funds for the Upper Peninsula. The county receives between $12,000 to $15,000 per year in fiduciary fees as reimbursement for Forsberg’s time.