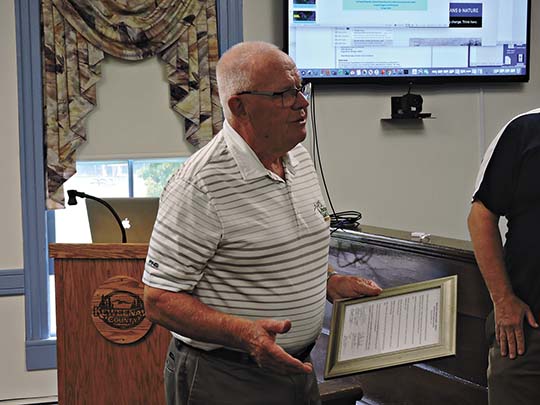 EAGLE RIVER — The Keweenaw County Board of Commissioners unanimously adopted Resolution Number 19-5, officially recognizing Robert Mikesch as the longest serving public servant on record in the county. The resolution was adopted at the board’s regular September meeting on Sept. 18.

Mikesch, in addition to working 42 years in the state of Michigan Treasury Department, served as Keweenaw County’s auditor for 55 years.

“Whereas Robert B. Mikesch walked through the doors of the Keweenaw County Court House for the first time in September, 1964,” the resolution states.

Board President Don Piche read the resolution aloud during the presentation, for which Mikesch received vigorous applause.

“You didn’t have to do this,” said Mikesch. “I appreciated working here. The other day, they called me about this.

“I was trying to think of who was here when I started. I can remember many names, but I can’t remember some in between.”

Loretta Bausano was the clerk, he said, Eppo Tulikangas was the treasurer, and Ted Rodgers was the sheriff.

Since then, he said, there have been six treasurers in the Treasurer’s Office, and he recalls six different clerks.

“The county has always been in good stable, financial condition, which I am very proud of, because I’ve got some counties that weren’t in that good a condition.”

County Clerk Julie Carlson thanked Mikesch for his years of service and dedication to the county.

“Honestly, you’ve seen us through many bad times, many versions of Quick Books,” she said, “and we’ve had some ups and downs, and you’ve always seen us through, so, thank you so much for everything you did, being a good mentor, friend, and for many giggles.”

County Treasurer, Eric Hermanson, also expressed his gratitude to Mikesch for his devotion, as well as his tutoring and advice.

“Bob, for my part, I came from private business to this job,” Hermanson said, “thinking I knew everything I needed, and I didn’t. I was alarmed at how little I knew. I couldn’t have gotten to where I am now with you being willing to teach me, and being patient, I owe you a lot for that, Bob.”

Mikesch assured the clerk, commissioners and the treasurer that should they need his help in the future, they know his phone number.