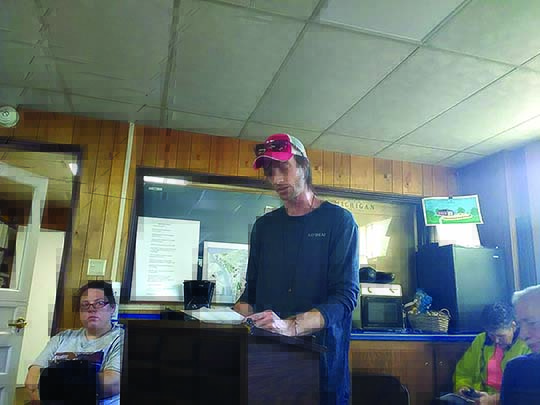 (Skip Schulz/For the Gazette) Eric Hopper, Ontonagon village resident and husband of councilor Sarah Hopper, spoke in favor of Ontonagon allowing a marijuana retail business to open in the village.

While the Ontonagon Village Council has moved on with the appointment of a new president, the former Wagers business now completely demolished, a water leak repair contract awarded, residents still used the Public Comment time to state their support or opposition to allowing a marijuana retail business to open within the village limits.

An Ontonagon businessman, Chris Schultz, used all five minutes given to him to voice his support for an ordinance allowing a marijuana retail business to open in the village. The tattoo business owner went over some of the issues voiced by individuals at the last two meetings.

This ranged from water treatment at the business to on-site surveillance. “Waste water is treated on sight, used and disposed of properly after being treated. These systems are filed with a facility plan and inspected yearly for their license.” Schultz said. “Surveillance requirements of the facility is 24 hours, 365 days a year, by a live monitor system.”

Schultz gave the specific pages of the law to which the retail marijuana business must follow.

The husband of the counsellor that initiated the decision for the Council to not “opt out” of allowing a marijuana business, counsellor Sarah Hopper’s husband Eric, voiced his support vehemently.

“According to Forbes Magazine, 2018 article, it is a boom to a local economy,” he said.

Hopper stated how marijuana is much safer than alcohol and in Colorado, “teen use has dropped significantly since legalization.”

“You don’t see an overdose from the use of marijuana,” he said.

Unlike the Sept. 9 meeting, where more people spoke in opposition, Monday night’s meeting only had one individual that voiced his concern, resident Bob Hartle.

“What I’m concerned with is the cost to the village,” he said. “There really isn’t a state agency that will sit down and give you the facts and figures. I’m leery of government. I’ve seen government cheat people over the years in my lifetime.”

“I’m 52 years old, and I have been a cannabis user since I was 15,” resident John Cahill said to open his comments. “The reason I am here is because of the last meeting. I watched the video and I could not stand it. The ignorance of some people.”

Cahill stated that drug use by teens in Colorado has dropped significantly. He also commented that he feels there is a big “black market” on marijuana in the community, but, with legalization, those buying marijuana will now be paying a tax on the purchase.

After another extensive debate on opting in or opting out of allowing a marijuana retail business to open in Ontonagon, Village Manager Joe Erickson reported that the Wagers demolition is complete.

“The crew will be working on cleaning up and backfilling this week.” Erickson said.

He continued by saying that due to disposal fees being about $8500 less than in the bids, Pestka Construction reduced their bid by $21,900.

“The cost for the demolition of the Wagers Restaurant building is $69,100, with $50,000 being covered by the Land Bank Authority Grant,” said Erickson.

The council approved the bid from FA Industrial Services of Iron River, Michigan, to install a 10-inch valve on M-64 to isolate a water leak under the highway.

Due to bids being much higher than anticipated, the council decided not to grant the bid to the two companies that bid on the Pebble Beach Drive project.

Erickson stated that a contractor will be at the Ontonagon Recreation Center this week to evaluate the ice making equipment.

“Hopefully the equipment can be repaired to make ice this season,” Erickson said.

With the resignation of former Village President Gerard Waldrop and the council voting to appoint Tony Smydra to the position, the council approved advertising for the open council seat. There is also at least one opening on the Village Planning Commission with the resignation of David Rosemurgy. Erickson also stated that Planning Commission member Jim Brogan has not been attending meetings and his term is coming up, “so we will also have that opening to fill.”