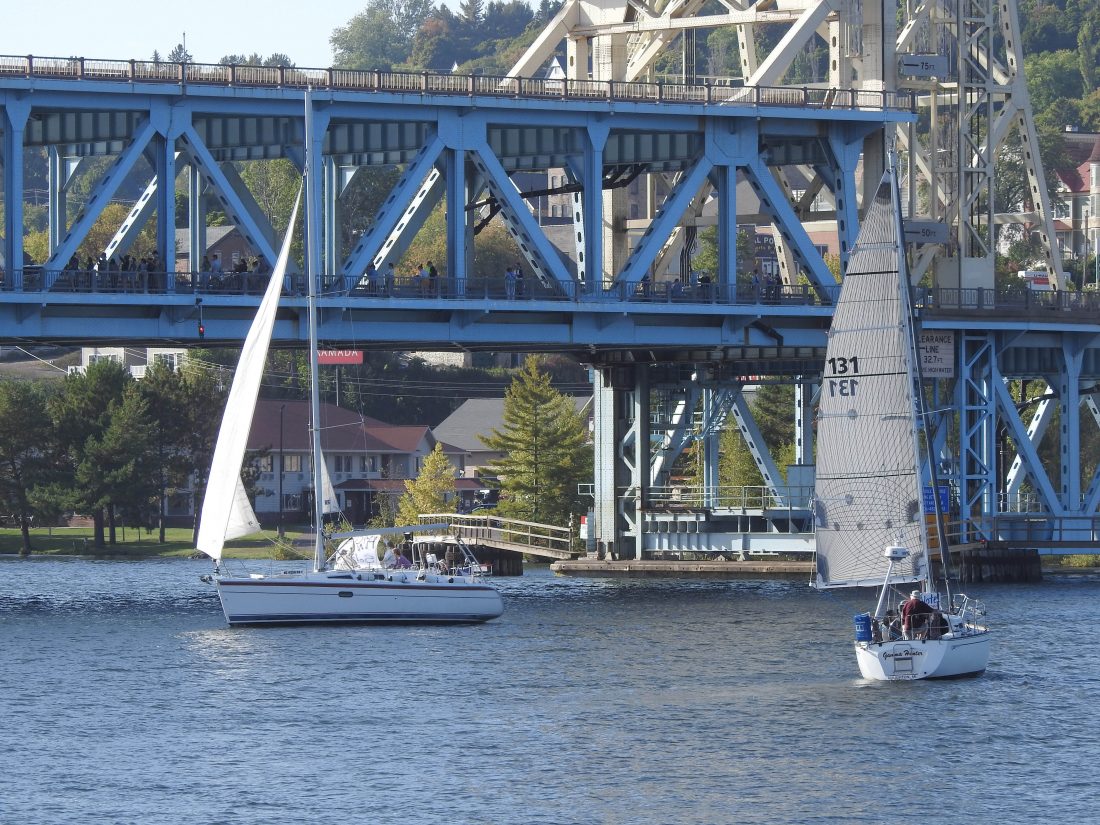 (Garrett Neese/Daily Mining Gazette) Boaters signal their support for climate marchers during their Sail for the Environment, held concurrently with Friday’s march.

Shouting slogans and carrying signs, about 200 marchers took to the Portage Lake Lift Bridge on Friday afternoon as part of a global day of protest to urge action on climate change. 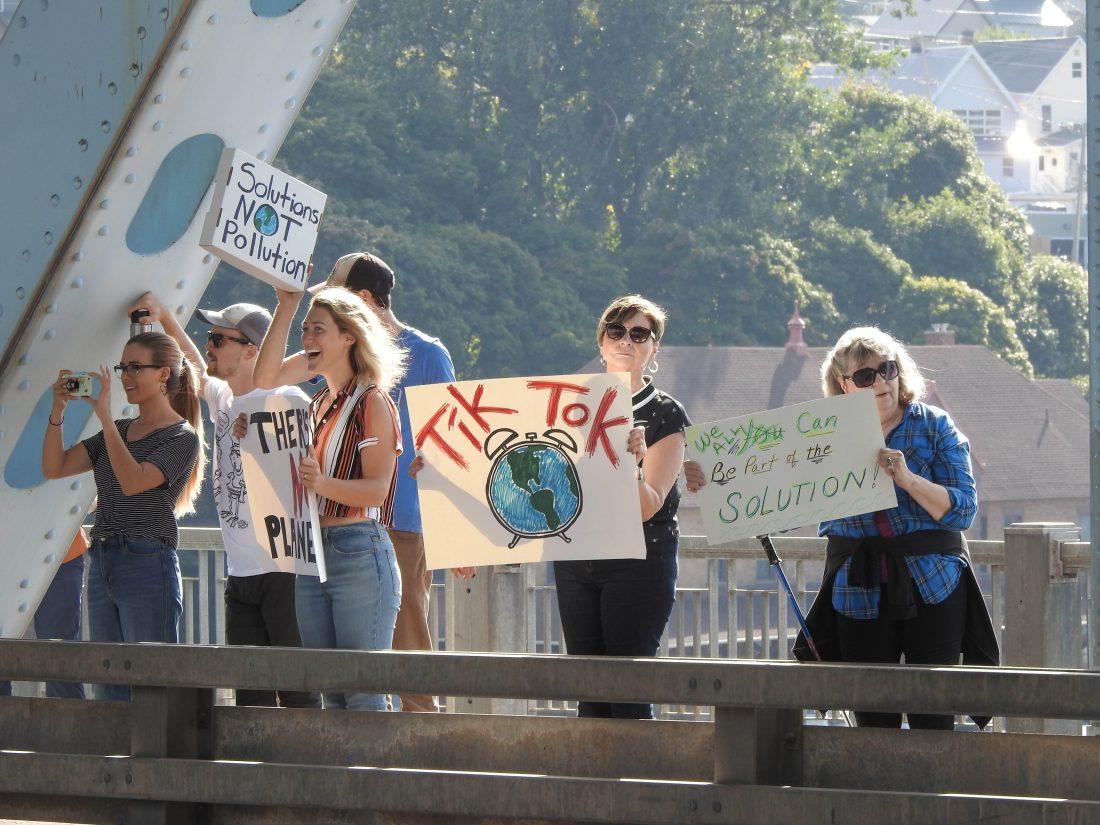 (Garrett Neese/Daily Mining Gazette) Some of approximately 200 protesters for climate action show signs to motorists on the Portage Lake Lift Bridge Friday. The event was one of more than 3,500 worldwide.

Elise Rosky, one of the organizers with Keweenaw Youth for Climate Action, had been inspired to join after she passed a march a few months ago protesting the separation of immigrant families at the border.

“I didn’t know there was a large community of people in town who cared about those issues, and it made me feel very validated and enthusiastic,” she said. “I feel like having a public march here actually has an impact on people’s psychology and people’s thoughts and emotions locally.”

Jack Wilson, another organizer, said he would like to see the federal government to declare a climate emergency and work to curb energy emissions, move to 100% renewable energy by 2030, as well as enact a Green New Deal.

The 2030 target comes from the Intergovernmental Panel on Climate Change’s 2018 report, which put that year as the target date to reduce carbon emissions by 45%. That cut is the amount needed to keep global warming to 1.5 degrees Celsius, which would avoid some of the worst outcomes, such as the melting of ice sheets, the report said.

Ideas for local action include laying the groundwork for more renewable energy, Rosky said. As a group, it plans to thoroughly research the options, then bring ideas to policymakers. 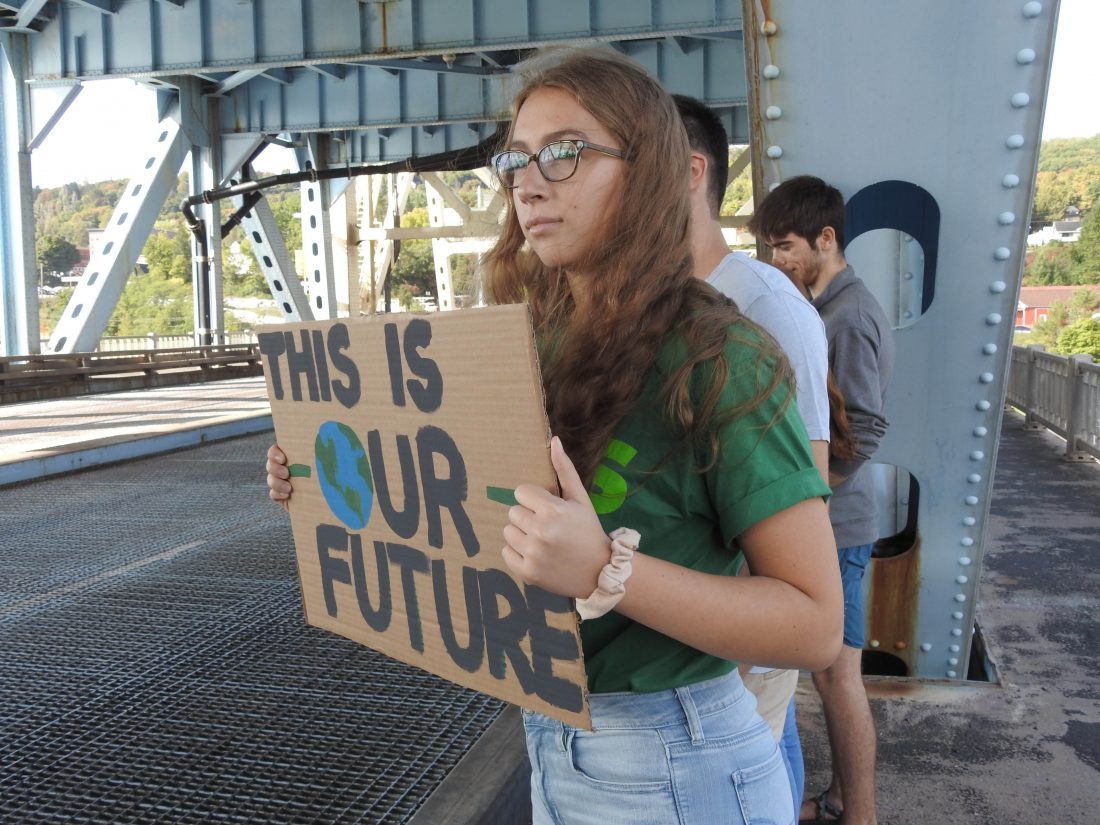 The biggest indirect effect of the march was getting people into groups around the world.

“Now we’re together, we know who cares about these issues,” Rosky said. “And so we can continue to organize things other than a march. We can organize some actions in the community.”

The march was one of more than 3,500 planned globally. The worldwide protests were timed to the upcoming United Nations summit in New York City, which will be attended by 16-year-old climate activist Greta Thunberg.

As marchers filled the sidewalks along the bridge, local boaters also held a Sail for the Environment, honoring Thunberg’s boat trip across the Atlantic to avoid the environmental impact of a jet.

The youth-driven nature of the protests carried over to the crowd, which was dominated by university students or younger.

“I want to save the world so we don’t have so much air pollution and it won’t get too hot,” said Jacob Sundstrom, a fourth-grader at Houghton Elementary School.

“A big reason I feel that change doesn’t happen is because so many people will stay at home and think, ‘Oh, nothing’s going to change,'” he said. “But we need all of those people to get involved.”

Alexis Pascaris’s first plan was to pick up trash in the woods instead of attending Friday’s march. Although she didn’t know how effective public action would be, she joined the march anyway.

“I decided to be here because I support climate governance, and I feel that there isn’t much being done,” said Pascaris, a first-year masters student in environmental and energy policy at Michigan Tech. “Just to speak loudly to our leaders that we are listening, we are watching and we do care.”