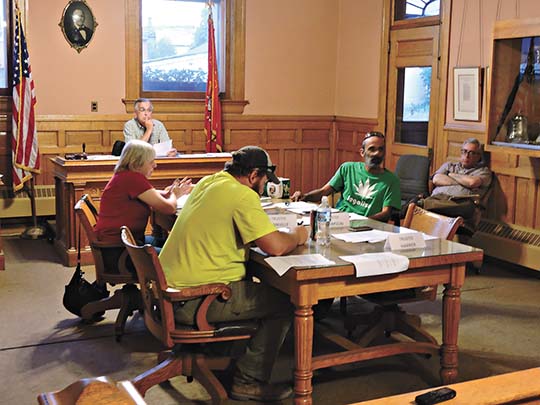 (Graham Jaehnig/Daily Mining Gazette) With two trustees and the village manager absent from Tuesday’s regular Village Council meeting, Trustees Jay Rowe (yellow shirt), Roxanne King, and Nathan Anderson, along with Village President Dave Geisler, had a difficult time moving forward on some issues, including interviewing street department employee candidates. Without a full quorum Tuesday, it was decided to convene a special meeting at 5:30 p.m. on Thursday.

CALUMET — The Village Council received more backlash for its lack of action on the police department issue at Tuesday’s regular meeting. A resident told the council that because of Elm Street construction, the section of the street on which he resides is without street lights, and three times he experienced attempted break-ins at his home, at least one of which occurred through his bedroom window.

His concern was added to those expressed at the August regular meeting by two other residents, Sandy Johnson and Peggy Germain.

Trustee Nathan Anderson said it is agreed that a patrol is needed in the village.

“At night would be great,” he said. “At the last meeting, we had some equipment that we had to give back to the county, on the account that we didn’t have a police officer.”

The equipment which Anderson mentioned is computer and electronics equipment that was purchased by Houghton County through a 911 fund. The equipment was given to the Hancock Police Department.

“While talking with the undersheriff,” Anderson said, “he expressed the idea of bringing a Sheriff Department patrol up here.”

The same resident who expressed his fear after three break-in attempts at his home, also said that in the alley behind his house, someone has a truck and trailer parked that forces others using the alley to back all the way to intersection of the next cross street to exit or enter the alley. With no police, there is no one to enforce ordinances.

Another resident also expressed fears of no village police protection once the recreational marijuana ordinance is passed.

“What about security if we don’t have a police department,” he asked. “This is a cash business from what I understand…are we going to have rent-a-cops in area, because I’m concerned. We’re going to have people coming up, like claim jumpers in the mining days. Are they going to be responsible for their own security?”

As more public concern for public safety is expressed, there has still been no decision from the council.

Village President Dave Geisler said the subject of police staffing is on the agenda of the Public Safety Committee, which should approach the council at the October regular meeting.

The Public Safety Committee had last month expressed a desire to sell the police vehicle, but did not present the proposal to the council. While the committee will discuss the police situation, then offer its recommendation to the Village Council, it is ultimately the council that must make the decision to retain or dissolve the police department.