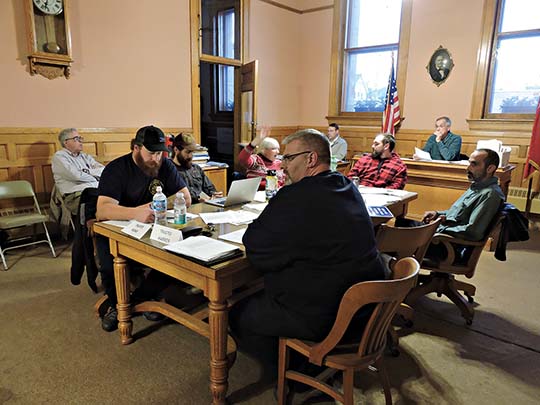 (Graham Jaehnig/Daily Mining Gazette) Calumet Village council chambers were noisy at Tuesday’s meeting, as audience members argued back and forth with council members over the question of marijuana-based businesses being permitted to operate with the village. Trustee Doug Harrer (foreground), voted against the marijuana ordinance, as did village President Dave Geisler (behing the desk). Clockwise from left are Trustees Josh Row, Andrew Ranville, Roxanne King, Village Manager Caleb Katz, and Nathan Anderson.

CALUMET — The Village Council adopted an adult-use marijuana facilities ordinance at it regular meeting Tuesday, with a vote of 4-2, with one trustee absent.

The operations of these various facilities are restricted to five locations, the ordinance states, within the general commercial, downtown commercial, and industrial districts, as defined by the Village of Calumet Zoning Ordinance.

The Ordinance, Number 153, will become effective 45 days after its publication, as required by law. In April of this year, the council approved a Medical Marijuana Facilities Ordinance.

The permitting of marijuana facilities within the village has been a controversial issue in the village over the past several years, and several objections were raised by meeting audience members during the discussion period.

Trustee Doug Harrer and President Dave Geisler were the two who voted against the ordinance. Harrer said his objection was the number of facilities the ordinance permits.

“We’re allowing five different businesses in town,” he said. “I think that that is too many.”

Harrer said he felt that two was a more realistic number than five when considering the size of the village and the population.

Between all facilities discussed in the medical and adult-use marijuana facilities, the total number businesses actually approaches 18. Trustee Nathan Anderson, author of both ordinances, said that while that is an unrealistic number, he does not believe nowhere near that number of applications will be received by the village. The purpose of that number, he explained at the meeting, was to allow a high number of applicants to operate businesses in the village, and allow the free market to ultimately determine how many can profitable operate.