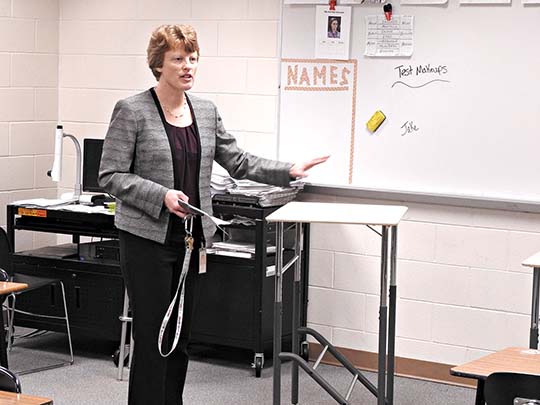 Filpus took the board to the classroom of Cheryl Decker, one of the seventh-grade teachers who received equipment through a grant from the Houghton-Portage Township Schools Foundation. The grant funded flexible seating — unorthodox pieces or accessories that help students relax in class.

The seventh-grade classrooms and resource room received four wobble stools, which allow students to move around while staying seated.

“If you need to get out of your seat and kind of move around, it’s less of a distraction,” Filpus said.

Some desks also had “foot fidgets” near the floor where students stretch their legs while still sitting.

“I don’t know if it’s connected, but during lunch now, there are two or three tables of seventh-graders that stand and eat their lunch,” she said.

Many teachers have been part of a nationwide trend towards tables rather than individual desks. The old furniture can then be swapped out for broken ones in other rooms, said Superintendent Doreen Kramer.

“It’s a nice way to do some replacements,” she said.

The middle school also upgraded technology. Its computer lab is in its second year. A new Chromebook cart replaced an outdated one, Filpus said.

New carpeting is gradually being added to classrooms throughout the middle school, Filpus said.

Board members also looked at the renovated bathrooms, which included new floor surfaces.

The middle school addition was completed in 1998, following the 1990 completion of the rest of the building. Filpus, who began teaching at the school in 1995, initially didn’t have her own classroom.

“I was called the cart lady,” she said.

The middle school is organized by grade so students have their core teachers in one area, Filpus said.

“Obviously, we have to share certain areas with the high school, but we do try to keep (grades) six, seven and eight as separate as possible,” she said.