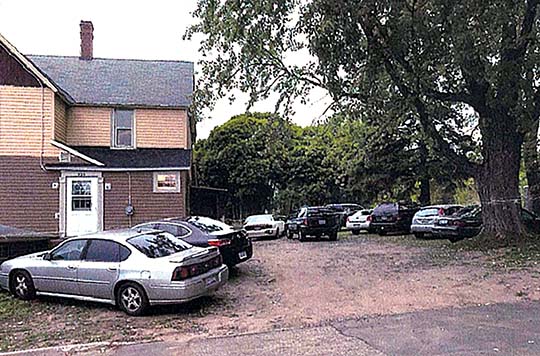 (Image provided by Google Earth) The city has given the apartment owner, Brian Kangas until the end of October to bring the properties back into compliance with R-1 zoning guides as the house was before becoming a rental (shown above in 2017).

HANCOCK — A number of Hancock residents have submitted complaints to the City Council regarding potential zoning violations on Prospect Street.

Prospect Street is an R-1 residential zone, meaning that it is only intended for single-family dwelling or two-family dwellings subject to public hearing.

Two addresses in particular, 939 and 942 Prospect St., frequently have multiple cars parked in and around the properties, which nearby homeowners believe to be indicative of multi-family dwellings, which constitute zoning violations. Communications to the city from the homeowners also include noise complaints, complaints regarding snow removal, and concerns that over-use of the buildings will result in lowered property values in the area.

The communications were received by the city last month and, at last month’s regular council meeting, City Clerk, Treasurer, and Acting City Manager Mary Babcock reported that compliance notices had been sent out and the owner of the apparent rental properties’ owner, Brian Kangas, had been contacted.

“(Kangas) was not following the rental definition that we have for over three residents, unrelated, in a property. He has until the end of October to reduce the number of residents in the houses,” Babcock said at Wednesday’s October regular City Council meeting. “He seems very receptive to it, and according to him they were outside of their lease also.”

Since notices were posted, members of the council had driven by the properties but we’re unable to positively confirm or deny improvement in the situation.

“There are still more than three cars there … but there aren’t eleven or twelve like there were at one time,” said Mark Hoffman, one of the residents who had written to the council. “I wanted to make sure that we were moving forward on maintaining the status as an R-1.”

Babcock said that, historically, zoning issues like this have been difficult to enforce. Mayor Paul LaBine agreed, pointing out that the city can issue civil infractions over zoning violations but lacks the power to evict violating individuals.

“We’re more into compliance than punishment,” said LaBine. “(But) we don’t want this to be an empty gesture.”