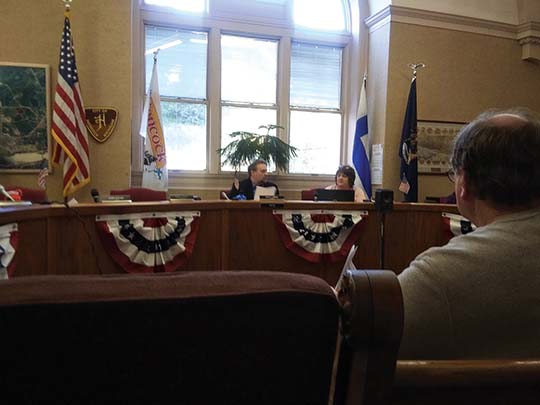 (Jon Jaehnig/For the Gazette) The Hancock City Council voted to increase the pay for city clerk Mary Babcock who is also filling in for City Manager Barry Givens while he is away for his health.

HANCOCK — At a special meeting of the City Council on Wednesday, the council voted to increase the pay of City Clerk Mary Babcock by $500 per pay period to reflect her work as acting city manager.

“I don’t feel like that reflects the amount of work that has been put into that position,” said council member Whitney Warstler. “I question if that’s a fair compensation.”

Council member Will Lytle pointed out that Babcock has also been acting as treasurer and that raising her additional pay by $1,000 per month can still be considered less than fair for the work.

“If it were $10,000 per month, it wouldn’t be enough to help Mary do all that she has to do,” agreed Mayor Paul LaBine. “… there was never any intention to under-pay Mary, we were just kind of feeling things out.”

Council member Dan Seguin further thanked Babcock for her efforts, saying that she has “done a wonderful job stepping up to the plate.” Seguin also stressed that the increased pay would not be a significant burden the city budget.

“Technically, we’re not paying Barry right now, so we have that money to redistribute,” said Warstler.

Babcock, who occupies non-voting positions and was not involved in the vote to increase her pay, expressed gratitude to the council.

“I wouldn’t want any more than that,” said Babcock. “I can only do the job to the level that I have time for it.”

The council will also be bringing in previous City Manager Glenn Anderson as a contractor on a part-time basis to assist Babcock until Givens is able to return to his position.

The council also voted to amend the resolution that made Babcock “acting assistant city manager” to make her “acting city manager.” The change makes no difference in her responsibilities, but satisfies a requirement by the state that a city not be without a city manager for more than 120 days – a deadline that Hancock has nearly reached.