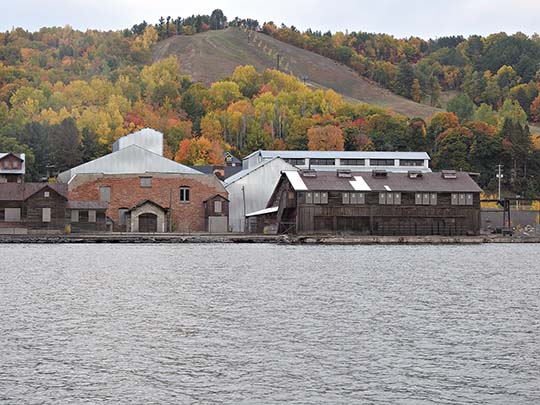 “The community has a vested interest in that facility, where’s it’s built, how it’s built, and there’s some great opportunities over there at the smelter site,” Waara said.

Isle Royale Superintendent Phyllis Green said Thursday there is no timetable yet for a move. The previous director of the NPS Midwest regional office had directed that any new build take place on the park’s property in Houghton, she said.

The buildings at the Quincy Smelting Works date back to 1898, when the Quincy Mining Co. built the smelting works to refine and ship its own copper. It closed in 1971.

Due to the resulting environmental contamination, it was added to the EPA Superfund project. Cleanup was completed in 2011. Three years later, the KNHP Advisory Commission bought the property from Franklin Township with the intent of transferring it to the NPS.

The site, which had been left intact by the company, is part of the Quincy Mining Company National Historic Landmark District.

Another plan calls for the construction at the current site of a parking lot behind the Keweenaw Chamber of Commerce. That site is flawed, as it gives the park no room for future expansion, the city council’s resolution said. The plan for expanded parking on the waterfront is also a suboptimal use of the property, the city said.

A 2011 reuse concept plan by the Quincy Smelter Steering Committee included rehabilitating the reverberatory furnace for use as the headquarters. The dockside warehouse would be converted into a welcome center and passenger waiting area.

The Quincy Smelting Works would become a cooperating site with the Keweenaw National Historical Park. The park worked with Franklin Township to stabilize the site with an eye towards relocating Isle Royale.

“At the time, it was a discussion about ‘When they need to move, here’s where they should go,'” Waara said. “They’re at the point where the funds have been allocated for them to start doing something.”

Green said Isle Royale will likely get money from NPS in 2021 to begin planning a move. Depending on the complexity of the project, completing the building could take three to five years, she said.

“We don’t own the smelter site, and that has to be the first step, whether it’s for Keweenaw (National) Historical Park or Isle Royale,” she said.

A Peters spokesperson said Thursday Peters has pressed for the NPS to consider relocation and to assess the viability of the former smelter site.

“The current headquarters presents a series of logistical and safety challenges that need to be addressed,” he said. “Senator Peters looks forward to working with local officials and stakeholders to reach a solution that benefits the community, visitors and the National Park Service.”