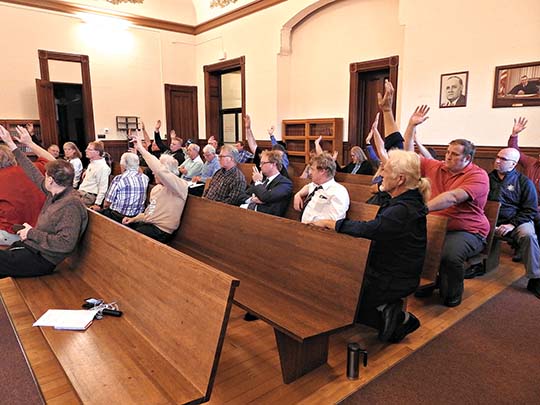 (Garrett Neese/Daily Mining Gazette) Members of the Houghton County Jail Task Force vote at their Sept. 4 meeting on one of two options to continue studying. At its final meeting Wednesday, the group endorsing building a new jail, sheriff’s office and district’s court somewhere in Houghton. The issue now goes to the county board, which will decide on a location and millage request to go to voters at some point in the future.

HOUGHTON — The Houghton County Jail Task Force has made its recommendation.

At its final meeting Wednesday night, the task force endorsed building a new jail, district court and sheriff’s office at a site to be determined in Houghton, said board Vice Chairman Tom Tikkanen.

One option considered by the task force was locating the facility on Dodge Street across from the courthouse.

While there is no concerted effort to locate it anywhere besides Dodge Street, Tikkanen said, the board will also look at alternate sites within Houghton. It would require adequate municipal utilities, and also space for a potential new courthouse in the future.

“The primary reason why this thought occurred is because there’s some who feel there’s not enough space available on Dodge Street in the event the jail facility needs to be expanded again in the future,” Tikkanen said.

The county has made several attempts to pass a millage on replacements or additions for the jail, which county officials have said is unsafe and puts the county at risk of lawsuits from prisoners. The district court offices, now located on the second floor of the courthouse, have also long been identified as a security concern due to the cramped space.

Preliminary estimates, based on the Dodge Street location, put the cost of the new facility at $20 million, Tikkanen said.

State law requires the sheriff’s office and some court functions to be located within the county seat. That was one of the reasons the task force ruled out Camp Kitwen, a minimum-security prison near Painesdale that was closed in 2009. They also looked at travel expenses for court costs and other police responses, as well as other ongoing costs of operation.

The task force also ruled out pursuing a smaller jail addition behind the courthouse, which voters had narrowly defeated in 2018. At the previous meeting, task force members who studied the addition had concerns about its expandability.

The county board will make the final determination on choice of location and ballot language.

Tikkanen said there is no timetable yet for the board’s decision, or which election date it would pursue.

Although the task force’s recommendations are complete, Tikkanen asked members to stay involved to help develop ways of getting word out about the proposals to county residents.

“We greatly appreciate the hours and days of donated time from the task force,” he said. “This was represented from municipalities all across the county, and they made some very keen observations and comments.”