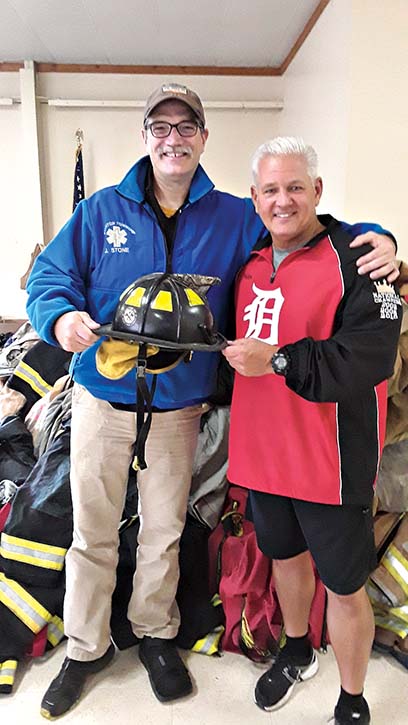 CHASSELL — A number of local volunteer fire departments received over a half a million dollars in used fire fighting equipment last Thursday, thanks to a downstate organization called From our Fire House to Yours.

“When he told me the raffle tickets were fifty bucks apiece,” said Hughes,” I was like ‘what in the world are you buying for these tickets being so much?’ because I knew he was in a very rural area, and he didn’t have that much of a commercial district, or high-rises, and it wasn’t like he needed a million-dollar ladder truck, and he said, we just don’t have any gear. Our gear is from like 1980.”

There were about 400 fire chiefs, marshalls and inspectors at the Conference, and Hughes came up with an idea to ask them if they had spare equipment they could send the Rudyard fire chief back with. 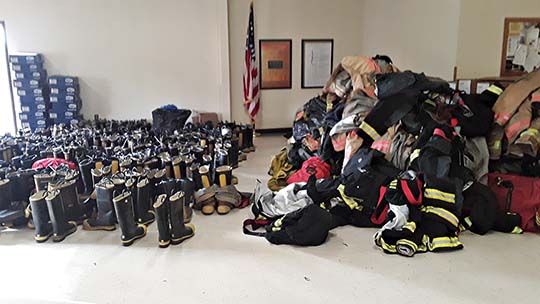 (Graham Jaehnig/Daily Mining Gazette) Just some of the items that downstate fire departments donated to local fire departments that arrived last Thursday. Among items donated were thousands of dollars in coats, and thousands more in boots, essentially everything from defibrillators to oxygen bottles and tanks, breathing apparatus and even gas-powered generators and lights.

“My connection with Belfor is,” said Hughes, “I’m a public safety liaison representative,” Hughes said, “and so all my contacts, all day long, are fire chiefs. So, in the crowd, I started texting them, asking who might have a couple of helmets, or turn-out gear, or boots for these guys? I’m going to try to send him back with some updated equipment.”

The response was so overwhelming, Hughes said, he did not have a chance to put any gear in his truck. Two days later, he told him he would probably need to ask his supervisor permission to take a Belfor box truck, because that is how much equipment he had committed to him in just two hours.

“He only had 18 members,” Hughes said, “so I figured if I got him 30 sets of gear, he’d be a happy camper on his way, and it would be a nice little gesture to help our brothers and sisters in the Upper Peninsula, and it turned out to be about a quarter of a million dollars in used fire equipment that the downstate fire departments either just upgraded in their budgets, or they wrote grants for and were awarded federal grant money, and replaced all their stuff.”

A lot of the equipment discarded by departments was either thrown into dumpsters, said Hughes, or was being shipped to countries in South America. Hughes asked why the materials were being shipped out of state when so many rural departments in Michigan were so much need.

Two trips were made to Rudyard, said Hughes, and last year, they made a trip to Iron Mountain, and earlier this year, Stanton Township fire fighter John Stone contacted him, expressing a need in the local region of the city of Houghton.

On the most recent distribution trip to the Upper Peninsula, Hughes and four Belfor trucks and trailers, brought with them over half-a-million dollars in fire equipment to be distributed among several local fire departments.

“There are jaws of life equipment here,” said Michael Lawrence of the Quincy-Franklin-Hancock Townships fire departments, “a lot of hand tools for getting in and out of a building, breaking wires, and fires, and locks, and jaws of life stuff is for extraction from vehicles and that sort of thing. We have a lot of generators for lights on a scene, especially in our rural area, we have to light it up so we’re not tripping over a lot of hoses, each other. It’s organized chaos at a scene.”

It is difficult to maneuver easily in full fire-fighting outfits, Lawrence said, adding it is a lot like wearing a space suit

Also donated by the organization are breathing apparatus, oxygen tanks, bottles, which Lawrence said are enough in quantity to equip four of five departments.

“Each bottle lasts about 15-20 minutes, depending on how hard you’re working, and how big a person you are, and those bottles are a couple of grand apiece.” Lawrence said.

“It’s really a nice outpouring of generosity from the Lower Peninsula for us, in a big way” he added. “A lot of the departments up here are not very well funded. Rural area, volunteer, and so having this really helps the budget.”

Hughes said, with four trailers need to bring all the equipment from the Lower Peninsula, it is the biggest load they have brought to the U.P. to date.

“This is very specific,” he said, “because he (John Stone) told me what they were looking for. For example, here is rescue boats, for water rescue. So, I’m thinking if we had to buy all this stuff, it would probably be to the tune of probably $600,000. It’s hard to put a gauge on it.”

(Graham Jaehnig/Daily Mining Gazette) Just some of the items that downstate fire departments donated to local fire departments that arrived last Thursday. Among items donated were thousands of dollars in coats, and thousands more in boots, essentially everything from defibrillators to oxygen bottles and tanks, breathing apparatus and even gas-powered generators and lights.