‘Night at the Museum’ helps fundraise for museum 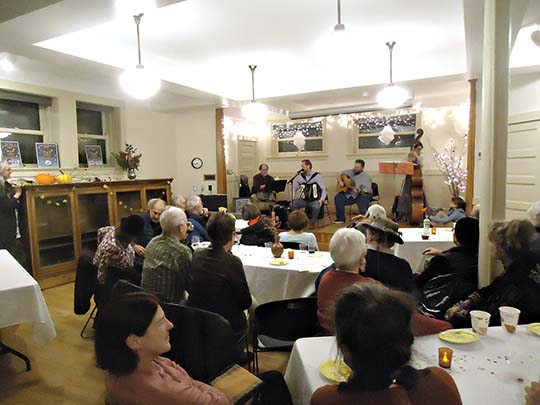 HOUGHTON — The Carnegie Museum in Houghton held its annual “Night at the Museum” membership drive and fundraiser Friday evening. Guests at the Oktoberfest-themed event enjoyed local brats and beer, as well as music by four local musical groups and performers.

There were also appetizers and desserts prepared by members of the museum board.

The event had been advertised through posters in Houghton as well as emails sent to museum visitors that had left their email addresses in the museum’s visitors log. A total of $25 secured visitors admittance to the event as well as a one-year museum membership.

Membership benefits include reduced admittance to those museum programs that do cost money as well as access to the museum’s annual report.

“Because (the museum) is owned by the city, we’re very committed to providing programs and admissions for free,” said museum director Elise Martin. “Memberships really help us … we’re trying to create a community that really wants to help support us.”

The city of Houghton owns the physical building that the museum is housed in. It also pays for the museum’s utilities and serves as a financial match on renovation grants. However, the cost of bringing exhibits and programs to the museum are covered by money raised from membership dues, fundraisers, and donations. The museum is also almost entirely staffed by volunteers.

“The city looks at it as a way to broaden (museum services) to everybody,” said board member Robert McGowen. “It’s not just the Houghton Museum.”

For the Night at the Museum, an event which has occurred annually since 2014, both floors of the museum were decorated with stars and relaxed lighting. There were also signs throughout the museum displaying the names of local businesses that support the museum.

“We usually play in a club or a bar. It’s a nice change,” said Bruce Rundman of Figure 4 Leg Lock.

Martin had asked Rundman if he and his band would play at the event when they ran into each other getting coffee in a local establishment.

“You read the room and go ‘alright, we’re going in this direction,'” Rundman said of the hour-long set that consisted of folk, country, and soft rock.

Anyone who missed this year’s Night at the Museum, will have to wait for next year’s party. However, anyone can become a member at any time. Forms can be filled out online at carnegiekeweenaw.org or in person at the museum. The Carnegie Museum in Houghton is located at 105 Huron St. and is open from noon to 5 p.m. on Tuesday and Thursday and noon to 4 p.m. on Saturday.