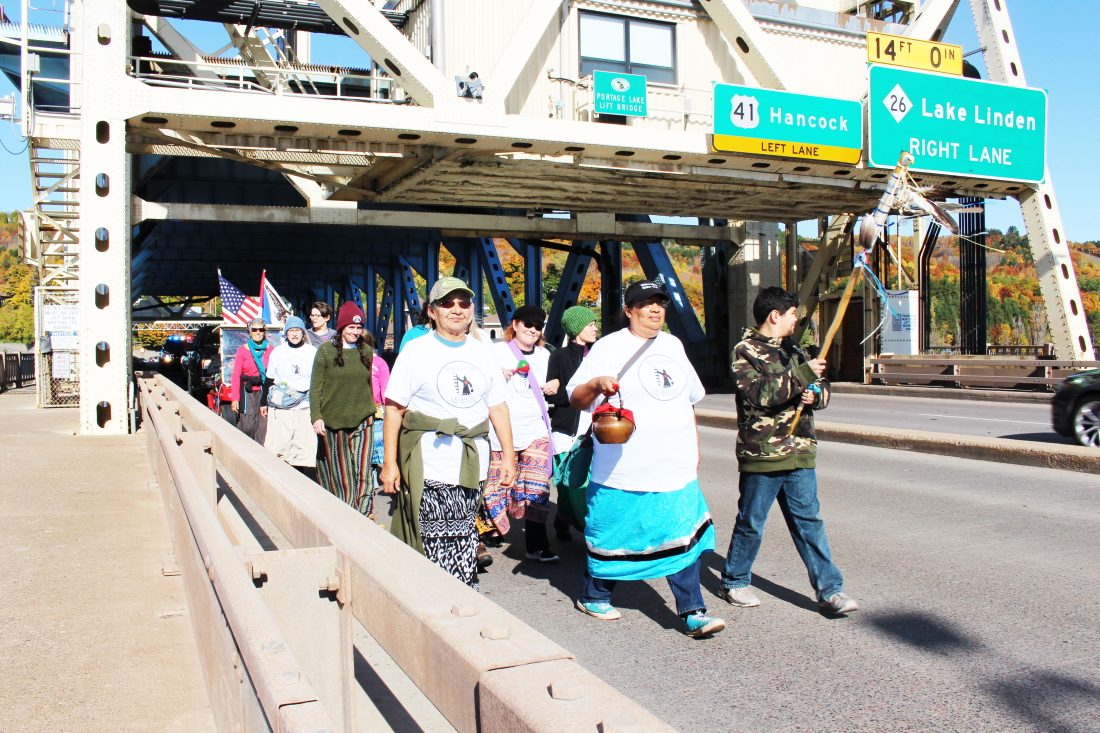 Before first light on Saturday morning, a group of about 20 people set out on the People of the Heart Water Walk — a 3-day, 90-mile walk from Copper Harbor to Sand Point in Baraga that is meant to help participants form a closer bond to the water and raise public awareness of the importance of caring for the water.

“It’s such a powerful and emotive experience to walk with all these women and men and to do this work for water and our relationship with it, so I’m honored to be here,” said Erika Vye, one of the participants.

After the initial opening ceremonies, the group set out following an Eagle Staff created as a standard for the water walks in 2015 and a small copper vessel filled with nibi (water in the Anishinaabe language). As part of the protocol of the walk, the water never stops moving during the day, and is only carried by women. The Eagle Staff can be carried by men or women.

These and other traditions in the water walk protocol were started by Grandma Josephine Mandamin, who started walking the water first. She walked all around the Great Lakes Basin and taught local leaders like Terri Denomie and Kathleen Chosa, but she “walked on” last winter.

“Grandma’s gone now, and we have to continue that,” Denomie said.

(Joshua Vissers/Daily Mining Gazette) Jenny Szubielak takes a turn carrying the copper vessel of water while her friend Carol Olsen carries the Eagle Staff along the shore of Lake Superior. Along the way, they sang the water song, written by Doreen Day from the Madawin lodge and passed to them by Grandma Josephine Mandamin.

The tradition is to keep hold these walks annually for at least seven years.

The People of the Heart Water Walk first started forming in 2016 when a group of locals went to the Standing Rock protests in South Dakota and met with elders at Camp Oceti Sakowin, according to Donica Hope Dravillas, one of the walkers who was with the group at the time.

The elders told them that they appreciated the interest and were willing to teach them, but insisted that they had to bring what they learned back home with them.

“I just kind of let that sink in and I kept that with me when I came back,” Dravillas, a Copper Harbor resident, said.

When they returned, she reached out to the Keweenaw Bay Indian Community and found Denomie. That December, they met in Copper Harbor to hold a water prayer. Normally, it is called a water ceremony, but Denomie elected to call it a prayer this time, in part because of the broad participation.

“I wanted everybody to be included in this,” she said.

Pastors and others also attended and offered their own prayers at the event.

That group kept in contact, and in 2018 when the Father’s Day flooding nearly destroyed Cynthia Drake’s house in Ripley, they met there twice to offer prayers.

“I don’t even know who organized that blessing,” said Drake, who was at the December 2016 prayer and participated in the People of the Heart Water Walk, too.

Nobody will take full credit for organizing this walk, but many people were involved in communication, organization and supplies.

“I feel like it organically formed through a lot of these things,” said Drake.

“There’s a large group of people that are working together to make this event happen, to do this work together,” Vye said.

The group is not promoting or fighting any particular legislation or project, rather they focus on helping people become aware of and strengthen their personal connection to the water.

“You won’t dishonor the water because you feel that connection,” said Drake. “Which we have whether we recognize it or not.”

(Joshua Vissers/Daily Mining Gazette) Jenny Szubielak takes a turn carrying the copper vessel of water while her friend Carol Olsen carries the Eagle Staff along the shore of Lake Superior. Along the way, they sang the water song, written by Doreen Day from the Madawin lodge and passed to them by Grandma Josephine Mandamin.