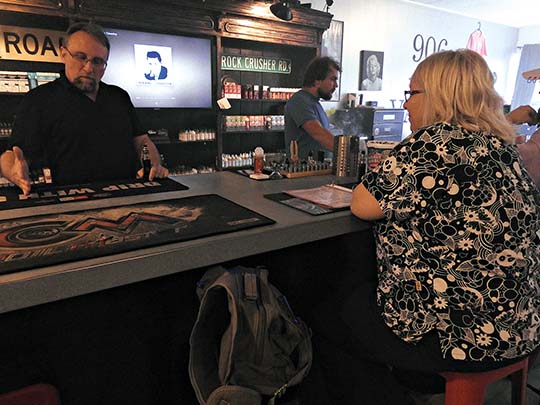 (Garrett Neese/Daily Mining Gazette) 906 Vapor owner Marc Slis, left, talks with customer Lori Karvonen at his shop in Houghton on Sept. 5. A Michigan Court of Claims judge issued a preliminary injunction against the state’s ban on flavored vaping products Tuesday in response to court proceedings initiated in part by Slis.

HOUGHTON — A local vape shop owner who sued the state to overturn the ban on flavored vaping products said he is thrilled by a preliminary injunction against the ban issued Tuesday.

Michigan Court of Claims Judge Cynthia Diane Stephens ruled against the state, saying the harm to residents who might otherwise return to smoking outweighed any potential health impact from the products, according to the Associated Press. She also said the state’s delay in implementing the rules belied its claim of a public health emergency.

Gov. Gretchen Whitmer announced the ban on Sept. 3, citing health concerns and the appeal of flavored tobacco products to children. The ban, which also prohibits the misleading marketing of e-cigarettes, took effect on Oct. 2.

“I’m grateful that the judge was able to find it within herself and the constraints of the law to grant us the injunction, and I’m looking forward to the next steps in the legal process,” said Marc Slis, owner of 906 Vapor, who filed suit against the state last month. “I’m happy for every shop owner and liquid manufacturer in the state who are allowed to open back up. Most importantly, I’m happy for all the people who are using electronic cigarettes to quit smoking and can do so now.”

In a statement Tuesday, Gov. Gretchen Whitmer sharply criticized the ruling, saying “this decision is wrong.”

“The explosive increase in youth vaping is a public health emergency, and we must do everything we can to protect our kids from its harmful effects,” she said. “I plan to seek an immediate stay and go directly to the Supreme Court to request a quick and final ruling.”

Since Michigan’s ban was announced, several other states have announced bans. Last month, President Trump also announced plans to ban most flavored e-cigarette products, citing their use by children.

Slis said he and others in the industry have been looking to pursue “sensible” regulation of products.

“We’ve been stymied on the federal level with that, getting no help or cooperation from the FDA, and I hope this is a sign that we can move forward in a positive direction, on all fronts,” he said.

906 Vapor had closed after the ban took effect. In his suit, Slis said flavored vaping products made up about 80% of inventory.

Slis had packaged the inventory up in case of a reversal. He plans to restock and reopen the shop as immediately, he said Tuesday.

“It’s my sole source of income, and more importantly, I have customers in the Copper Country relying on me to quit smoking,” he said.