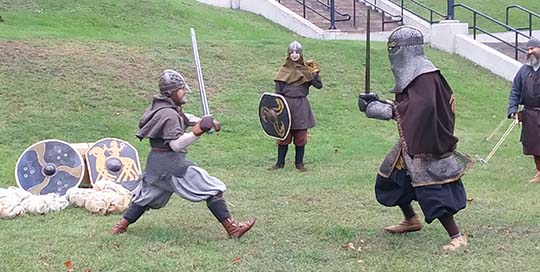 HANCOCK — The smell of smoke and the sounds of metal-on-metal filled the air on the Quincy Green Saturday as Balagard — Viking Age Finland took place there and in the Finnish American Heritage Center. The one-day Finnish and cultural fair assembled over a dozen experts from the Midwest, the United Kingdom, Finland and Sweden, who appeared in period dress to share their knowledge and crafts. Activities included demonstrations in smelting, blacksmithing, cooking, textile making, music and poetry. There were also games and crafts for children.

(Jon Jaehnig/For the Gazette) Balagard – Viking Age Finland was a one-day historical and cultural fair that took place in the Finnish American Heritage Center and on Quincy Green on main street in Hancock on Saturday.

The event was organized to showcase the cultural diffusion that took place in modern-day Finland and Sweden during the Viking era of one thousand years ago. The Viking period is often remembered – with good reason – for its violence and brutality. However, it was also a period of trade, exploration, innovation, and cultural exchange. Because of its geographic location and natural resources, Finland was often at the center of it.

“Today is a demonstration of culture between the Finns – or the people that would be Finns – and the people of the outlying regions including modern-day Sweden,” said Wade Kaiser of Houghton’s Rusty Raven Forge. “The Finns were known for three main things: furs, wood, and iron. They didn’t have much else but they had these three things, and that was huge.”

Kaiser has been involved in reenacting for the last thirty years, including blacksmithing for the last fifteen years. In addition to creating period-accurate tools, weapons, and decorations, he uses a replica of a forge and bellows system from the area and period. 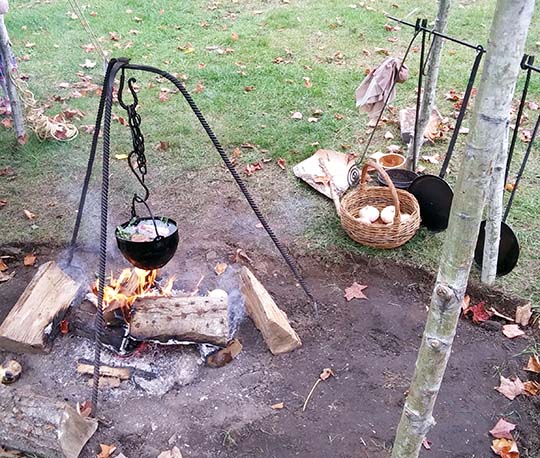 (Jon Jaehnig/For the Gazette) Balagard – Viking Age Finland was a one-day historical and cultural fair that took place in the Finnish American Heritage Center and on Quincy Green on main street in Hancock on Saturday.

Kaiser was one of the visiting experts but he was also a cofounder of the event with Tobias Dawson. Dawson has had the idea for an event like Balagard for some time but it only recently started to come together.

“I’ve been working on this for almost a year, sometimes more directly than others,” said Dawson. “Before it started sprinkling rain, we had 200 to 300 people in the yard and more inside.”

Dawson became interested in the Viking period when he was young and found an interest in wooden ships. His passion led him to discover the Vikings, who relied on their wooden ships to take them across seas from North-Eastern Russia to North America.

“It’s a really enjoyable pastime, to play Viking for a while, and there are so many different aspects to it,” said Dawson. “There’s a never-ending number of things to learn and explore.”

“I just really wanted to see [Balagard]. Our town has so much Scandinavian heritage and it’s exciting to see it represented this way,” said event-goer Jordan Chambers. “I think this is awesome, and the kids are loving it. There’s lots of arts and crafts for them and it’s a good family event.”

Dawson said that he was interested in holding the event again but it would likely occur every second year. In the meantime, many of the presenters from Balagard will likely be at the next annual Midwest Viking Fair in Moorhead, Minnesota.