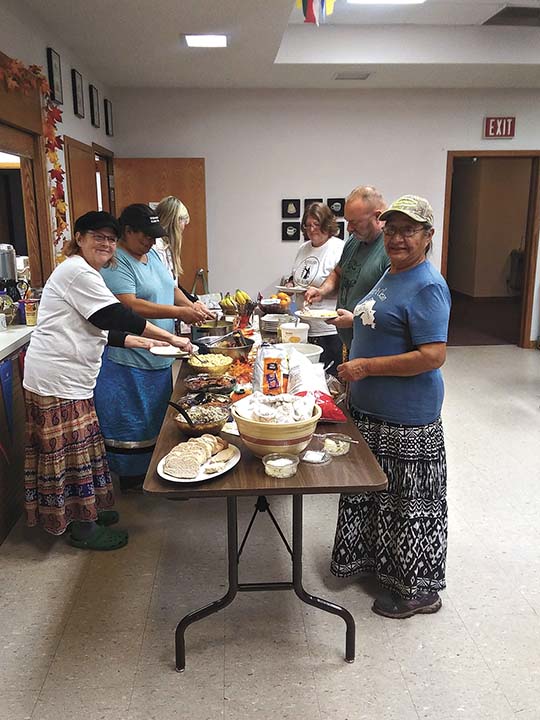 (Jon Jaehnig/For the Gazette) Terri Denomie (left) and Florine Chosa (right) fill their plate at the community For the Water Walkers, feasts that they have along the way are as important a part of building the community as they actual journey.

HOUGHTON — The People of the Heart Water Walk stopped in Houghton Sunday night for a feast at Good Shepherd Lutheran Church. To the group walking the 90 miles from Copper Harbor to Sand Point to raise awareness for area water quality, the nightly feasts were more than just meals.

“When you sit down and you eat food together, you can’t help but get to know somebody,” said Water Walker Anne Newcomb, who organized Sunday evening’s feast.

“All of the roles everyone are doing are building the community,” said fellow Water Walker Cynthia Drake. “The walk is part of that but it’s not everything.”

When Drake’s house was badly damaged by the Father’s Day flood, members of the Keweenaw Bay Indian Community were contacted to do a water ceremony. The same group became the core organizers of the People of the Heart Water Walk to help bring attention to the water as a resource in danger rather than as a destructive force, according to Water Walker Kathy Chosa-Smith.

“Around here, there’s this legacy of mining and a lot of the sands are very toxic,” said Chosa-Smith. “We speak for the water because it does not have a voice of its own.”

Chosa-Smith specifically addressed Buffalo Reef, a formation off the Eastern coast of the Keweenaw Peninsula extending roughly from Gay to Traverse Bay. Chemicals seeping out of nearby stamp sand deposits have endangered the reef, which is an important breeding ground for fish. Another connection with the feast was the often repeated motto “without water, we wouldn’t have food.”

The feast consisted of multiple dishes that were prepared ahead of time by the Water Walkers to be warmed up and served in the Good Shepherd’s kitchen and fellowship area.

“Bucky (Beach), as a pastor, rocks. Whenever the community needs something, he steps in,” said Newcomb. “When I called and asked if we could (hold the feast) at Good Shepherd, he told me he had to talk to the president but he would call me back and it wasn’t five minutes before he had an answer.”

“(Good Shepherd), as a community here, are very supportive of what’s going on with tribal spirituality and the environment,” said Beach. “Reaching out to people who have the same heart is easy. It’s a natural thing to just open the doors for whatever is needed.”

The morning after the feast, the Water Walkers left Good Shepherd to complete the final leg of their journey. It is too late for people to take part in this year’s water walk but there are still opportunities for people who want to help.

“They can send us prayers. They can do their part to see what they can do to be more mindful of the water,” said Chosa-Smith. “That’s what we do as Anishinaabe people.”