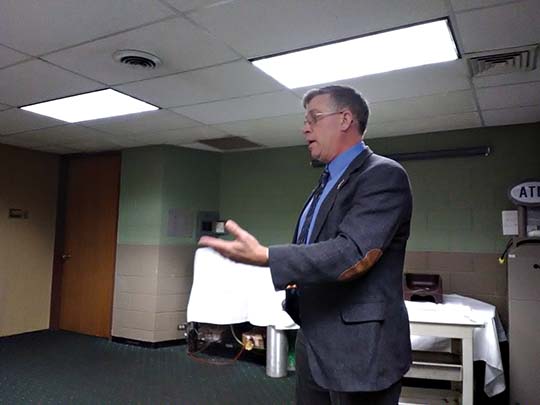 Weaver opened up with saying that he met with Rantala, and while he has nothing against Rantala personally, he believes the Sheriff’s Department needs management changes.

Weaver stated that on his handout he only has four goals, “however I have many more.” Of his goals he is focusing on includes increasing the number of road officers.

“I will look at different ways of obtaining the funds for this,” he said. “If you have facts for what you are asking for, it’s hard to say no. It’s how you negotiate. It is one way of thinking outside the box.”

As to one of his goals if elected sheriff, Weaver looked at the safety of the citizens, including why some people come to Ontonagon County…including those that many would prefer not to visit or locate.

“A lot of people come here for low cost housing,” he said. “Some move here with bad intentions due to the lack of law enforcement.”

He stated in a separate interview as to why it is important to get more officers and what caused some past officers to leave the department.

“What has been brought up to me repeatedly by county residents in recent years is why the Sheriff’s Department has not been able to hire and retain new officers,” he said. “After talking with two of the young officers that left the department after just under a year of employment, they did not feel adequately trained. That includes training for the many duties asked of them. This includes investigation of crimes.”

Weaver explained he has served as a Law Enforcement Training Officer in the past.

“They didn’t like being the only officer on duty with no other deputy on duty as back-up,” Weaver said. “They also stated that the pay, including the lack of graduated pay increments for officers (was prohibitive). Another issue is continuing education was lacking compared with other departments. They (other departments) far surpassed Ontonagon County.

“This makes it difficult to appeal to new recruits. We need to be more competitive in pay, training, and support, to appeal to officers to come here and stay here.”

According to the self-proclaimed Conservative Democrat, Weaver said that the Ontonagon County Sheriff’s Department is in the lower half percentile, “compared to other comparable counties and municipalities. This doesn’t make it appealing to new recruits or seasoned officers.”

“This is a serious problem for our community that our residents and county commissioners need to seriously consider and remedy,” he said. “Either through seeking multiple grants, a millage, or both.”

Weaver told over 20 people attending the OCRP meeting that he “thinks outside the box in obtaining the funding to hire more officers and to provide the training needed.”  This included a question regarding Michigan DNR funding for Marine, Snowmobile, and ORV law enforcement in the County.

“I’m Jennifer Weaver’s husband,” he said, bringing a chuckle from those in attendance.

His wife is a Nurse Practitioner at Aspirus-Ontonagon.  They have been married since 1987.

Weaver was an eagle scout in 1979, a 1983 graduate of Central Florida College, and enlisted in the Army in 1983. While in the military, Weaver was deployed to the Persian Gulf War in 1990.

His background in law enforcement includes being a patrol officer, and a police chaplain.

“It was really good to attend a meeting that opened with a prayer,” Weaver said.

In 2001, Weaver was awarded the Paul Scurry Officer of the Year. He has been an Ontonagon County Sheriff’s Deputy since 2009.