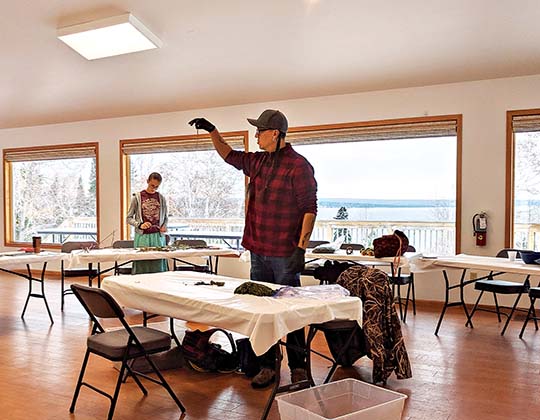 (Matthew Streeter/For the Gazette) David Johnson, the workshop instructor, displays squeezed-down asemma to the class at the Zeba Community Hall.

Asemma is the Ojibwe word for tobacco, and it is a highly important aspect of Ojibwe culture. The Zeba Community Hall in L’Anse hosted a teaching workshop on processing asemma traditionally by hand.

The class was led by Greg Johnson of the Lac du Flambeau Ojibwe. The youngest of 17, Johnson grew up around older people. He spent lots of time learning from them, picking up a vast array of traditional skills from beading to hunting and trapping. Perhaps the most important of these is turning asemma into ninsemma, or “my tobacco.”

“Tobacco is a gift,” he told the class.

Much of Ojibwe culture incorporates asemma as it serves as a vessel for the transfer of energy between man, nature, and the spiritual world. It is therefore of the highest importance to take care of the asemma gardens one grows.

Johnson was impressed with the quality and quantity of the asemma grown in the Debweyendan (“believe in it”) Indigenous Gardens (DIGs). Starting out with a mere handful of seeds brought by Karena Schmidt, an ecologist and one of the organizers of the series, it took only two years to grow a remarkable plot of plants which would be used to create ninsemma of the very highest quality. Johnson also stressed that the Ojibwe were not a hunter/gatherer culture as many have been taught. They kept gardens, sometimes vast in scope, where they tended to crops of wild rice, squash, corn, and of course, tobacco. He taught that there is a balance to it as well, citing accounts where a year that has a bad corn crop but an excellent wild rice crop and vice versa.

Kathy Chosa, one of the class participants and a plant technician with the Natural Resources Department of the Keweenaw Bay Indian Community, also spoke of the balance involved in growing tobacco. Chosa said that during the harvesting process they made sure to have at least one of the men present for this reason.

The bulk of the class was spent transforming asemma into ninsemma. It is a labor intensive, time-consuming operation that starts with the broad, football-shaped leaves of the tobacco plant and surgical gloves for protection. The main veins are separated from the leaf, as they are where most of the nicotine is stored. The leaves are then taken in handfuls and squeezed to push out more of the nicotine’s toxicity. The leaves can be folded into paper towels and pressed again and again until little toxic brown juice remains. The leaves must be separated and then set in a bag to dry, taking perhaps a week, and the final product will be high quality green tobacco. The process differs from commercial tobacco where while the leaves are dried out they ferment, increasing the nicotine present and producing a brown product.

Another difference between modern commercial tobacco and traditional Ojibwe tobacco are the additives. Commercial tobacco includes many harmful additives with the goal of making their products more addictive, such as adding ammonia to make nicotine easier for the body to absorb. Traditional Ojibwe additives are dried plants such as wild licorice, yaro (the two of which cannot be mixed), and barberry. Part of the thinking of these additives is to make the tobacco last, as a handful of leaves squeezed down and dried will not yield very much, so adding dried leaves from other plants will stretch the year’s crop out. Of course, blending the tobacco with the dried leaves of select different plants creates different aromas and flavors, too.

Modern ways of processing asemma are not frowned upon, with Johnson saying that if these things existed before that their ancestors would absolutely have used them. Using a coffee grinder to process the leaves once they are deveined saves a lot of time, although they must still be pressed in a colander until as much juice as possible is squeezed out. The reduction in effort does slightly reduce the spiritual quality of the asemma, although it is still far superior to store bought tobacco, which, according to Johnson is good enough to use.

The workshop was possible by a grant from the Michigan Health Endowment through their Community Health Impact program, this is the eleventh event in the series. The series is open to the public, hosting as many as 300 different participants over the course of the year, with five events in the DIGs and six other landscape harvest events.

Tradition was the way of the day, and Johnson was very pleased to share his knowledge with the group.

“I am happy to share this kind of knowledge with people who want to listen,” he said.

It was a sentiment echoed by Chosa. She wants to let people know that they are making efforts to share Ojibwe culture with the surrounding communities. These events go a long way to make that possible.