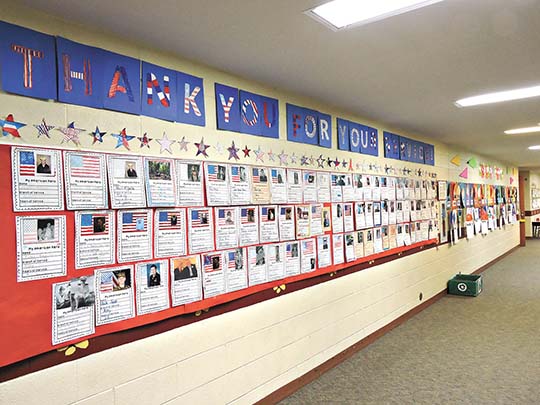 (Graham Jaehnig/Daily Mining Gazette) Hancock’s Barkell Elementary School commemorated Veterans Day by learning about veteran members of their families, and posting their findings, along with a photograph, on the bulletin board in the hallway. Principal Dan Vaara said there are 100 posts displayed.

HANCOCK — Barkell Elementary School’s K-2 grades commemorated Veterans Day by asking parents about family members who had served in the United States Military, then displaying their findings in the hallway of the school.

The idea for the project came from one of the early elementary school teachers, Principal Dan Vaara said.

“All of the Young Fives, Kindergarten, first and second grade students brought home a little note about the project,” Vaara said, “asking for the name of the veteran, the branch of service, and years of service. Then, the parents of the students got pictures of their veteran relatives and put them on this form with some information about which branch of the service they were in, the number of years of service, and some of them included extra information.”

Vaara said there are photographs of veterans of the Civil War, the two world wars, Korea, Vietnam, and wars in the Middle-East.

“If you look at that whole thing, and right now, we’ve got about 100 that have been brought back by students,” Vaara said, “and I think we’ve got pretty much every conflict covered from the Civil War on.”

Vaara said the students were excited to go home, talk with their parents, and have the conversations he feels are important to the students.

“I think it’s great that these families are sitting down right now and talking to their kids about their uncles and grandparents and great-grandparents, who fought to preserve our freedom,” he said, “and what better time of the year to have these kinds of conversations than around such an important day as Veterans Day.”

Vaara said it was the best Veterans Day project he has seen of any school at which he has worked.

“I’m very proud of those folks down there. It’s a brilliant idea, and it starts those dialogues,” he said. “I think nowadays, we don’t hear so much of these types of projects and these types of things happening as they should, so it’s great that they did that, it’s great that they’re having those kids involved, and having them have these conversations, and learning about it. It’s just more personal to them.”

Vaara said when students hear or learn about the wars that have happened in history, incidents that were necessary to preserving American democracy, knowing they had an uncle, aunt, grandparent, great-grandparent, and in some instances a parent, who was involved and who served, the history comes to mean more to the student, it becomes personal.

One of the oldest veterans on the wall is Chauncey Barnett, who had enlisted in a volunteer unit in Minnesota, serving in Edwin Hatch’s Independent Battalion of the Minnesota Volunteer Cavalry, from 1863-1866, and campaigned in wars against the Dakota Indians as far west as North Dakota.