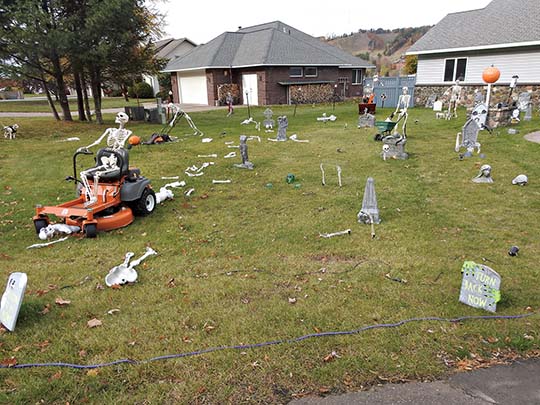 (Garrett Neese/Daily Mining Gazette) The undead stalk the earth, mixing murder and lawn care at Mary Marchaterre’s house in Houghton. She has prepared ever more elaborate displays since she was 18. More terrifying tableaus await in a pictorial in Saturday’s Gazette.

HOUGHTON — Around Halloween, a lifetime’s worth of ghouls, bats and severed limbs descend from Mary Marchaterre’s attic.

The Houghton resident has become well-known for the annual decorations at her home on Lakeshore Drive. They begin with skeletons and gravestones in the front yard, and continue through every room in the house.

Marchaterre grew up in the kind of house where her parents gave out apples at Halloween. Then she got to college, where she met people who dressed up and went all-out.

She began decorating her home — first apartments, then houses — so trick-or-treaters would know it was a good place to come.

After she married her husband, Dave Nitz, they lived in a house on a busy street in Ann Arbor with no sidewalk. So they went the extra mile to spook up the house and the lawn.

“Some of that was because there were bad spots in the yard, and I didn’t want people to fall in them,” she said. “There was a tree that had sunk down, so we put a body coming out.”

Like her previous homes, Marchaterre’s house in Houghton, tucked at the end of Lakeshore Drive, also isn’t an obvious spot to hit up for candy. At least not until the undead rise.

“As I was pointing out to a friend, if I got hundreds of kids like they did in Hancock, it never would have gotten to this level,” she said.

And some of it can be chalked up to the obsessiveness of a programmer.

“When we focus, we focus,” Marchaterre said.

Some of her collection has been built up from birthday or Christmas presents from her five siblings, who put on intricate Halloween displays of their own. When her next-door neighbors visited their child in Mexico, they found Day of the Dead pieces for her.

Decorating starts in August, when Marchaterre moves the skeletons out of the attic so she can get to the other pieces. Before freshmen parents’ weekend at Tech, she arranges them on the fence like they’re trying to escape.

She tackles the inside in September, moving to the outside in late September and early October.

New things come in every year. Some are dollar-store bats and bugs. Others are more intricate, like skull designs Marchaterre carved into book pages.

No room is immune. Victorian portraits in the living room reveal ogres as people shift position. A bathroom has “You’re next!” written on the mirror in blood. On the patio, a severed hand and fingers lie on the grill.

Marchaterre can’t even guess at how many items she has. The skeletons alone number in the 30s, sitting on a toilet or riding in her husband’s classic car in the garage.

The madness has partially infected the neighbors’ yards on either side. One of them contributed skeletons of a skijouring dog and human.

Some people complain Halloween is too commercialized. Marchaterre agrees — but it just makes it cheaper to find things, she said.

The decorations stay up until her husband’s trip to Argentina in mid-November.

Editor’s note: Look for a photo gallery of Marchaterre’s decorations in Saturday’s edition.