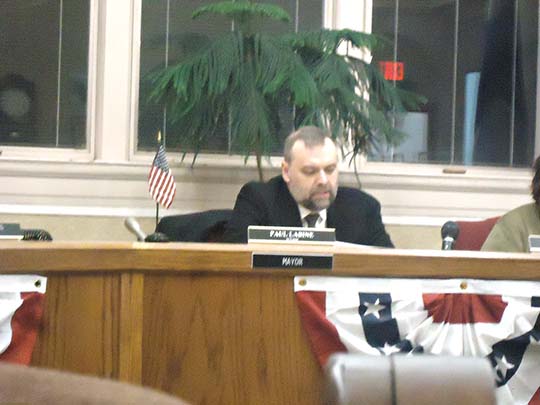 Jon Jaehnig/For the Gazette Hancock Mayor Paul LaBine, and Mayor Pro-Tem Will Lytle were both elected by the city council to serve additional one-year terms. At the next meeting, the council will further discuss vacancies in the Downtown Development Authority and the Planning Commission after the resignations of Pete Wickley and Tony Wilmers, respectively.

HANCOCK — The Hancock City Council discussed three municipal leadership positions at the November regular meeting on Wednesday evening. Mayor and mayor pro-tem were both up for re-election and Downtown Development Authority Chairperson Pete Wickley announced that he would be stepping down from the position effective Dec. 2, after 39 years of service.

Mayor and Mayor Pro-Tem are both one-year positions, elected from within the City Council by the councilors. Council member Ron Blau nominated sitting Mayor Paul LaBine to serve an additional term. Council member Whitney Warstler seconded the nomination, which LaBine accepted. With all council members present, all voted to retain LaBine as mayor. LaBine expressed his gratitude but suggested that next year he would “let someone else sit in the middle.” LaBine has served as mayor since the previous mayor, John Haeussler, stepped down for health reasons. LaBine’s term on the council expires in 2022.

Sitting Mayor Pro-Tem Will Lytle was also nominated to serve an additional term by councilor Whitney Warstler and seconded by councilor John Slivon. Lytle accepted the nomination, which was unanimously supported by the council. Lytle’s term also expires in 2022.

“I very much appreciate that we have councilors willing to serve in those positions … sitting in the middle’s a very different perspective,” Haeussler said in congratulating LaBine and Lytle during a public comment section.

“He’s a big part of the downtown and his will be big shoes to fill, but I’m sure he has his reasons,” said LaBine.

Also stepping down was planning commission member Tony Wilmers, effective immediately. At the October regular meeting of the Planning Commission, concern was expressed by the present members that the committee had been having a hard time making a quorum.

“I’m looking to make the Planning Commission more energetic and active so I’m looking to advertise his position and hopefully appoint someone at the next meeting,” said LaBine.