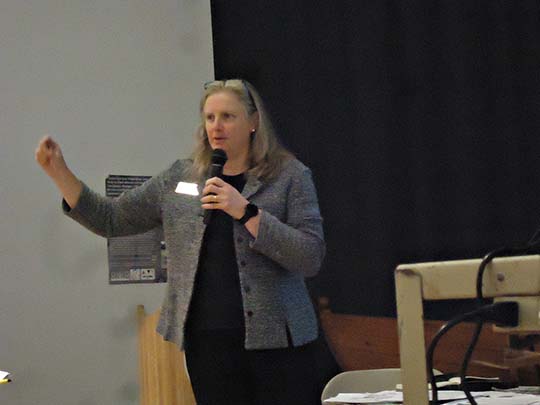 The committee, consisting of council members William Lytle, Whitney Warstler, and John Slivon, drafted a proposed ordinance that would allow recreational marijuana retailers and micro-businesses to grow and sell recreational marijuana in a portion of Hancock’s downtown. The proposal was put to a vote during a special meeting on Oct. 9 but was voted down 4:2 to allow for more organized public outreach.

The event was advertised on local community calendars and on the City Council website where the public could also view informational material and fill out a digital comment form. Over 90 online comments were submitted prior to the informational session, according to Lytle, who also said that aggregated forms of the comments may be made public by the city at a future date.

The informational meeting consisted of a presentation by Lytle followed by a brief recess. Marquette City Commissioner Jenn Hill then gave a brief talk. Marquette has already adopted policies similar to those proposed for Hancock. Those ordinances will go into effect on March 31.

“There are some parallels but, of course, Hancock is our own city with our own problems,” said Mayor Paul LaBine.

Other speakers had reportedly been invited but did not attend.

“Unfortunately, most of the people we invited either cancelled last minute, maybe because of the weather,” said Lytle. “Or some didn’t come maybe because they didn’t want to be on public record talking about something that is still coming together.”

Previous mayor and concerned citizen John Haeussler suggested that the city hold a city-wide rather than a council vote on recreational marijuana businesses saying “The closest thing that we can get to a representative sample … the closest you can get to doing your due diligence, would be to put it to a vote.”

A number of citizens voiced agreement.

“I think the referendum vote on the legalization in Michigan is very different from our feelings in the City of Hancock,” commented Downtown Development Authority Chairperson Pete Wickley, who said that businesses may leave the downtown if marijuana businesses move in. “The feeling in downtown Hancock does not support this proposal.”

LaBine called the idea of a vote “appealing.” City Clerk Mary Babcock said that the next opportunity for a vote would be August or later. Lytle had earlier said that “if everyone was on board, no one had any questions and we went as fast as we could” licensing could begin as early as January.

“While this is the first big public word, it certainly isn’t the last word,” said Labine.