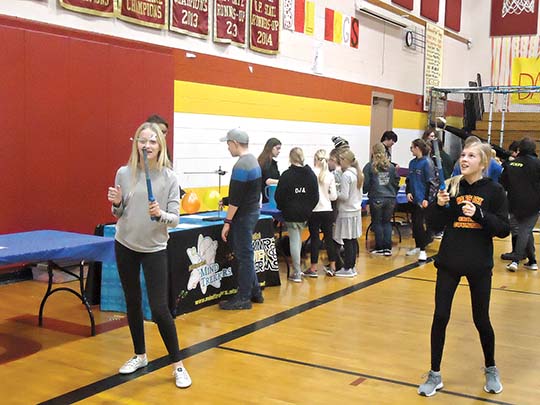 “This has been in preparation for about two months now, which is much quicker than most of our events come together. Hancock was so excited to have us here and so adaptable,” said Mind Trekkers coordinator Jannah Brandt.

The Mind Trekkers are a STEM-based outreach group at Michigan Tech but most of their events are scattered around the country.

“Usually we don’t get to do events for the local schools, so we’re excited to be here,” she said. 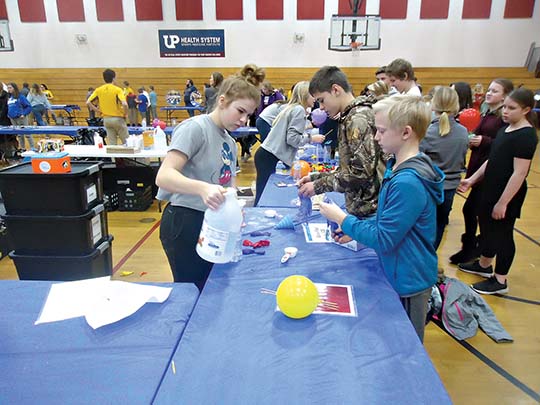 “We’re just showing them different mathematical equations, like the Fibonacci Sequence,” said Milam. “The Fibonacci sequence is a series of numbers attained by adding the two previous numbers, so 0,1,1,2,3,5,8. It regularly shows up in nature.”

Milam and Oehring showed students how the Fibonacci sequence appears in human proportion, the arrangement of petals on flowers, and even the patches on pineapples. They also told students about “fractals” – complex equations that form geometric shapes when graphed. Snowflakes are an accessible example. Activities at other stations included making ice cream, using crystals to line up beams of light, and learning about mirrors that cast reflections upside down.

Students from the different area schools were brought to the Hancock gym and common area for a morning session and an afternoon session. In between, lunch was provided to the volunteers.

“We can say that (the students) are getting time off of class, but in reality they’re not,” said Hancock Middle School principal Steve Aho. “They’re being engaged and they’re learning … These are the kind of experiences that we want to provide to our students.”

The event was largely coordinated by Dr. Steve Patchin. The current Hancock Superintendent previously worked at MTU where he was instrumental in forming the Mind Trekkers.

“It’s always fun to see something that you created blossom,” said Patchin. “Just to see (Mind Trekkers) coming from where it started and having it come to our students has been pretty incredible.”

Calling the event “priceless,” Patchin said that this kind of outreach is increasingly important for encouraging today’s youth. He also expressed his gratitude to MTU, both the professors and the student community, for their contributions to making the event possible.

“Gen. Z, the generation of kids that are coming through the system right now, these kids are very conscious of what they want to be when they grow up. Already, in middle school, they’re thinking about their careers,” said Patchin. “They’ve seen the choices made by the generations before them and the consequences, like all of the debt, and they want to make sure that they’re making the right choices for their future. Exposing students to these college kids that are doing these things and making these decisions allows the kids to start answering these questions for themselves.”