Many are to blame for high medication prices 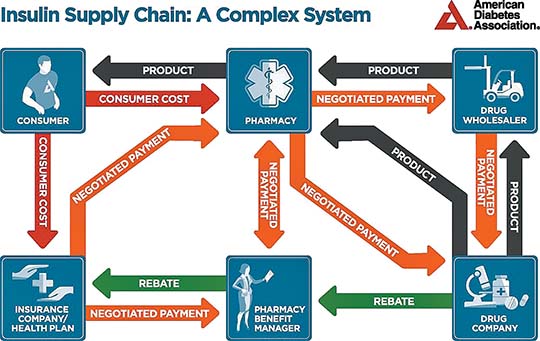 (Photo courtesy of the American Diabetes Association) Shown is a schematic of the insulin supply chain.

Gage said that Stabenow’s office had heard from Michigan pharmacists that contracts with drug manufacturers contained restrictive covenants that forbade pharmacists from informing consumers that a prescription drug was available at a lower price if they paid cash or selected a generic medication. If, however, a consumer asked if the prescription could be filled at a cheaper price, they could inform the prescription holder that, yes, it could be filled at a cheaper price.

“That’s not right,” Gage said. “That’s not morally right, in our country, to allow things like that to happen.”

Stabenow, he said, introduced a bill to ban the practice of gag clauses, as they are called. The bill was passed into law. However, that did not eliminate, nor reduce the problem of soaring prices. He referred to a flow chart of the insulin supply chain that appears with this article, from the American Diabetes Association.

“There are these things called PBMs (Pharmacy Benefit Managers), that sit as middlemen between insurance companies and drug manufacturers,” Gage said. “A long time ago…, private insurance companies were tired of running their pharmaceutical programs; it’s different than normal health care, a different set of challenges and issues, so they all got together, and they created these things called Pharmacy Benefit Managers, that were to be their negotiating arm with the with the drug manufacturers.”

The PBMs negotiate with drug manufacturers, such as Ely Lilly, one of the main manufacturers of insulin, Gage said.

“They’d say: ‘You’re currently charging us $200 a vile, we’re not going to pay more than $150.’ And Ely Lilly would go: ‘We can’s sell it to you for $150, so how about $180, and we’ll give you a $30 rebate,'” Gage said. “The PBMs would say: ‘Oh, that’s fantastic. We’re getting it for less; we’re getting a rebate, that’s great. We’re getting kind of what we were asking for.’ They would pass that $180 on to the insurance companies, they’d pocket the rebate, and everybody’s happy, Ely Lily is still making money, the insurance company is still making money, the PBM’s making money, and everyone’s happy — except the consumer. The only one paying more money in this whole scheme is the consumer, and they’re paying things like 1,200 percent increases over the past 15-20 years.”

MJH Life Sciences’ Medical Economics website concurred.Health insurers farm prescriptions out to PBMs, typically to the top three: CVS/Caremark, Express Scripts, and OptumRx, which between then manage about 70 percent of the market. PBMs negotiate lower prices directly with the pharmaceutical companies, getting discounts on different medications. MJH Life Sciences is a privately held medical media company in the United States.

Between 2012 to 2016, the average cost of insulin in the United States nearly doubled to $5,705 per year for individuals with Type 1 diabetes, stated The Guardian, a daily British Newspaper. Production costs for a vial of insulin are estimated to cost around $5 while pharmaceutical companies charge as high as $540 per vial and Americans are dying as a result of being unable to afford it in addition to the expensive costs of medical care, and supplies such as syringes and glucose monitors.