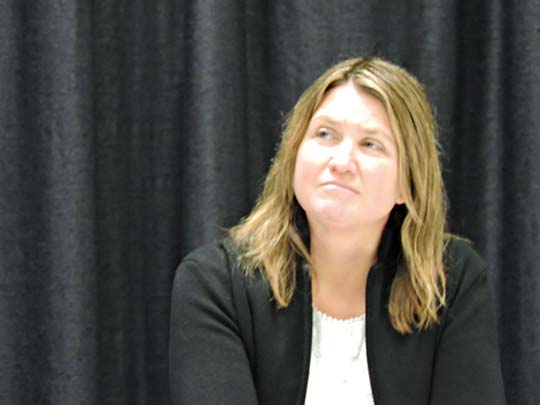 Graham Jaehnig/Daily Mining Gazette State Representative Sara Cambensy D-Marquette, said that the No. 1 aid to improving healthcare costs would be to eliminate money from politics.

MARQUETTE — Michigan Department of Health and Human Services (DHHS) has proposed a pharmacy drug coverage transition, which if adopted, would transfer more prescription costs from the state to low-income patients.

Under the proposed policy draft, outpatient prescription drugs will no longer be covered as part of the Medicaid Health Plan (MPH) benefit. If adopted, the policy will go into effect on December 1, 2019.

The proposal calls for all pharmacy drug coverage to be transferred to Fee-For-Service (FFS) Medicaid.

According to the policy draft, the policy, if adopted, will result in cost saving to the state through a combination of increased pharmaceutical rebates, and elimination of related MHP administrative capitation costs. The transition to a single formulary will also result in significantly streamlined administration for the state’s health care providers and coverage consistency for program beneficiaries, the draft states. But at what cost to low-income patients?

House Representative Sara Cambensy, D-of Marquette, who opposes the proposal, said if adopted, the policy would have an enormous negative impact on low-income Diabetes patients, because of the sky-rocketing prices of insulins and other prescriptions they need to stay alive.

In August, Cambensy introduced House Bill 4701, which was co-sponsored by 27 other House Democrats. The bill would limit the amount a state resident is required to pay for prescription insulin, regardless of the amount or type of insulin needed to fill the prescription.

“It’s very similar to what they passed in Colorado,” said Cambensy at the Third Annual U.P Diabetic Summit in Marquette Saturday. “What it does is, it caps the cost of insulin per month to $100, however, it is only for those who have insurance. It’s very difficult to find a way to cover diabetics that aren’t insured, and we know that’s our most vulnerable population.”

Another bill, sponsored by Rep. John Chirkun, D-Roseville, and Cambensy, would task the Michigan Attorney General (AG) with investigating, and issuing, a report on insulin pricing practices and policy recommendations for preventing overpricing. That legislation was referred to the House Government Operations Committee. The Government Ops Committee, said Cambensy, is where bills are sent to die.

“The reason why that bill was sent there, and our bills got split up is,” Cambensy said, “they’re willing to give me a hearing to say even if we don’t choose your bill, we know we have to do something.”

The reason the committee does not want to hear Chirkun’s bill, she said, is because once they have to look at the insulin supply chain system, they will have to answer to “a lot of people.”

Some of the information required to review the system is privileged information to which legislators may be denied, “simply because of the patents and the laws that go with protecting pharmaceutical companies from exposing how they come up with price calculations.”

Editor’s note: This the first part of a series that examines how pharmaceuticals, for-profit corporations, and insurance companies manipulate legislators to increase profits at the expense of American medical patients.