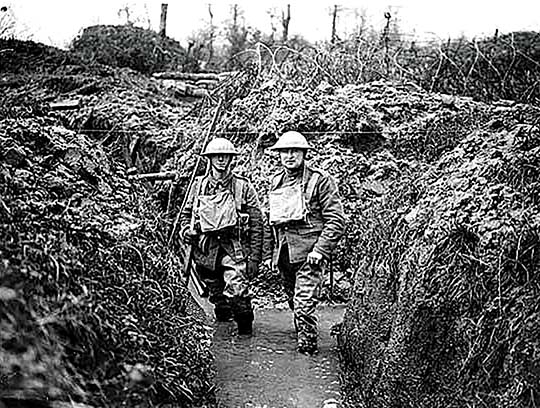 (Photo courtesy of Military Machine) Typical living conditions of Allied soldiers during “The War to End All Wars.” All troops — British, French, American, Canadian, experienced the horrors, disease, life, and death in the trenches of World War I.

HOUGHTON — No matter how well the Military trained the millions of young recruits for the combat they would face upon reaching Europe in 1917, nothing could prepare them for the conditions they would encounter in the combat zones.

With over 4.7 million men and women serving in the regular U.S. Military, roughly 2.8 million served overseas. Of those, 53,402 were killed in action, while approximately 205,000 were wounded. An additional 63,114 — more than the number of combat-related deaths — died of disease and other causes. Compared to the other allied nations, America’s losses were much lighter. In fact, American losses in World War I were about half of the total casualties of the Civil War. The total number of casualties as a result of the Civil War was recorded at 623,026, while the total number from World War I amounted to 321,516.

By comparison, British casualties were approximately 3,190,235, while France’s total was a staggering 6,160,800 casualties. It was the bloodiest conflicts in human history.

The total number of military and civilian casualties in World War I was about 40 million. Estimates range from 15 to 19 million deaths and about 23 million wounded military personnel.

American losses were lighter, because it did not enter the war until 1917, was slow to deploy in France, and fought just 13 major battles.

Death from disease was most commonly the result of trench warfare.

Artillery and small arms fire was constant, intense, and accurate, making it impossible for frontline troops to exit the trenches to relieve themselves, creating threateningly unsanitary conditions. Infectious diseases such as dysentery, cholera and typhoid fever were common and spread rapidly.

Because trenches were deep to protect occupants from ground fire, they were frequently took on water, leaving men standing constantly at least ankle-deep in water. Constant wet feet, in leather boots, caused trench foot, a painful condition in which dead tissue spread across one or both feet, sometimes requiring amputation. Trench mouth, a type of gum infection, was also problematic and is thought to be associated with the stress of nonstop bombardment.

Constantly trapped in the trenches for long periods of time, and under nearly constant artillery fire and bombardment, a shocking number of troops suffered from what became known as “shell shock.” While there have long been debates and arguments over the cause of shell shock, ranging from cowardice to mental breakdown, modern science has been discovering mounting evidence that shell shock is the result of brain injury resulting from repeated exposure of artillery fire, high-explosives. Recent research on brain tissue of combat soldiers has revealed damage to the brain and its nerves resulting from shockwaves of bomb blasts. In many cases during World War II, shell shock, or combat fatigue, was linked to mental and physical exhaustion.

By late 1818, Axis powers accepted the war as lost. The Armistice took effect on November 11, 1918, and was referred to as Armistice Day. Over the years, the holiday evolved into what is today, Veterans Day.