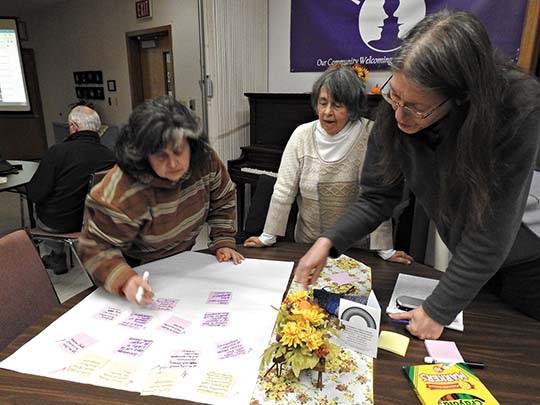 (Garrett Neese/Daily Mining Gazette) Meral Jackson, Marilyn Cooper and Kristine Bradof write down suggestions for getting public input into the redevelopment process during the second meeting of a citizens’ group focused on Houghton’s proposed redevelopment of Lakeshore Drive.

HOUGHTON — A citizens’ group formed around the potential development on Lakeshore Drive will present requests for more input to the Houghton City Council at its next meeting.

The group held its second meeting Wednesday night, where it worked to nail down its goals and structure, as well as a plan for ensuring there would be public participation during the redevelopment process.

“All these ideas we have are great, but they don’t mean much if we don’t have as citizens input into this process .. we have to get the city and Veridea to acknowledge that citizen input is important, and that we’re going to be at that table making decisions with them,” said Dave Bach, organizer of the group.

In September, the Houghton City Council entered into an agreement with The Veridea Group of Marquette, selecting it to develop a proposal for the parking deck area of Lakeshore Drive between Quincy and Huron streets.

The city’s Lakeshore Redevelopment Group is currently meeting with Veridea. After Veridea finishes its proposal, the city council will decide on whether to sell the properties to Veridea.

Group members will have until Monday to submit ideas for what they want the statement to the council to say. One of the major ideas brought up Wednesday was for one or two members of the citizen’s group to be added to the city’s redevelopment committee.

At the Monday meeting, Veridea president Bob Mahaney stressed the proposal outlined in its request for qualifications submission were only to demonstrate what it could do, Hertel said.

“He said, ‘Now we need to study what we should do, because there are lots of moving parts,'” he said.

Veridea plans on studying traffic, parking, hotel occupancy and market research before putting together a design, Hertel said. Waara said at the meeting he was working to get ahold of engineering evaluations done of the parking deck in 2012, Hertel told the group.

The timeline for development mentioned in the RFQ is also fluid. Director of development Michele Thomas had been surprised when told Veridea’s RFQ said it was scheduled to break ground in June 2020, Hertel said.

“We’re actually moving faster as the citizens’ group than they are as the developer,” he said.

Wednesday night, group members broadly agreed on the goal of getting more input. They generally got behind a multi-pronged approach of getting Veridea to seek public input, while also getting Houghton to hire a third-party consultant to seek public opinion. In a straw poll, none backed the idea of predominantly focusing on input with Veridea.

In a brainstorming activity, attendees split off by table to think of ways to get public input into the development process. In addition to pushing for representation on the redevelopment committee, ideas included a public scoping process to solicit ideas for the space, and providing surveys to businesses on the parking deck area.