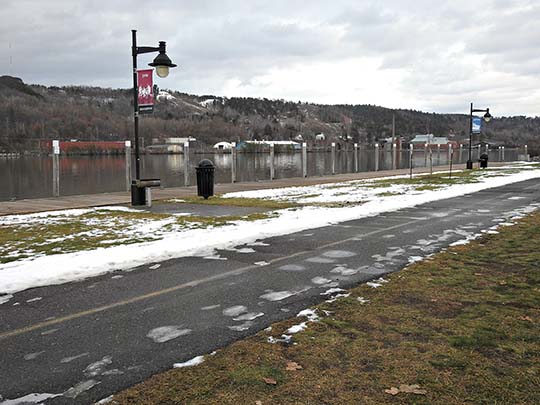 Garrett Neese/Daily Mining Gazette The bare spots on the grounds seen here are projected to be buried under a foot or more of snow following a storm beginning late Tuesday.

HOUGHTON — Temperatures in the 40s, patches of green sprouting everywhere – even the most optimistic person knows the weather of the past week will not last.

Regression to the mean is coming, swiftly and harshly, with a winter storm expected to dump a foot or more of snow on the Keweenaw. The National Weather Service issued a winter storm warning starting late Tuesday night and lasting the next 24 hours.

The culprit is a “Colorado low” – a low-pressure system originating in eastern Colorado and slowly crossing the Great Plains to the Upper Peninsula, said NWS meteorologist Jacob Horton.

“Usually these Colorado lows are the ones that produce more impactful snow than your traditional clippers,” he said.

Much of the Keweenaw Peninsula is forecast to get a foot of snow, with some parts getting up to 16 inches.

Heavy winds will compound the problem. By Wednesday morning, visibility is expected to be less than half a mile.

The NWS forecasts blizzard conditions near the lakeshore. Anyone traveling should keep a winter survival kit in their vehicle in case of an emergency, the NWS said.

On Lake Superior, there is potential for storm-force gusts of up to 50 mph, Horton said.

The system should taper down Wednesday night and be out of the area by Thursday morning, Horton said. Thanksgiving should only see scattered snow showers.

The reprieve could be brief. There are signs of another storm arriving in the Keweenaw late Friday, Horton said.

“We’re almost a week away with that, but there’s still some uncertainty how that’ll track,” he said.