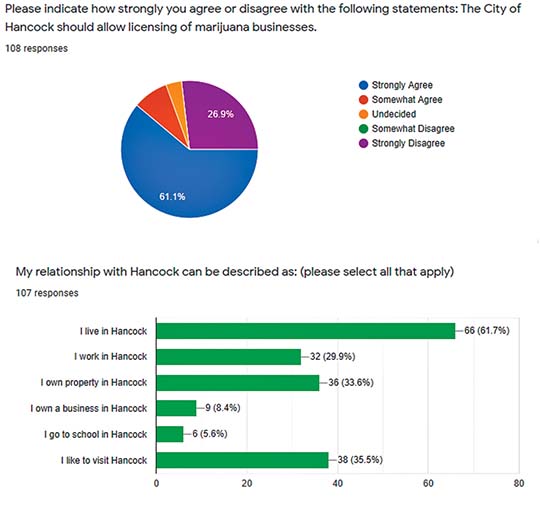 On Wednesday, the Hancock City Council’s Ad Hoc Recreational Marijuana Committee released the results of an online survey meant to gauge the public’s feelings on recreational marijuana licensing in the city and more specifically in the downtown district. The results, which were shared with a number of local media outlets via email, includes 108 responses to the online survey, which has been live since early October on Hancock’s website. A number of responses were also collected from the attendants of the Recreational Marijuana Info Session held by the city council in early October.

The survey also touched on the possibility of putting recreational marijuana licensing to a referendum vote. The idea was brought up during the public discussion portion of October’s informational session where it was popular among attendants. Mayor Paul LaBine called the idea “appealing” and said that the council would look into the possibility. However, comments on the topic left on the online survey were overwhelmingly negative, pointing out that 57.3% of the Hancock voters voted in favor of the legalization of recreational marijuana at the state level last year.

While the Ad Hoc Recreational Marijuana Committee and the city council is taking survey results into consideration, they have not yet moved forward on ordinances or on placing recreational marijuana on a municipal ballot.