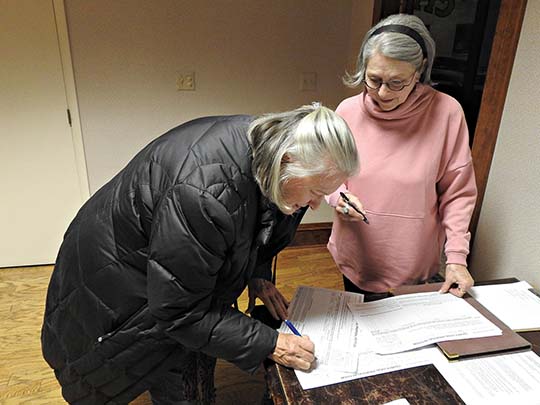 (Garrett Neese/Daily Mining Gazette) Patty Vilmann, left, signs a petition circulated by Illa Garver of Houghton, right, at Wednesday’s Houghton City Council meeting. The petition would add a proposal on the May ballot that would prevent Houghton from selling parcels on Lakeshore Drive to a developer until a decision-making process involving the public is implemented.

HOUGHTON — Area residents spoke for nearly an hour about potential development on Lakeshore Drive at Wednesday’s Houghton City Council meeting, nearly all asking the council to slow down the process and allow more public input into what, if anything, is built there.

In August, the council voted to enter into negotiations with The Veridea Group of Marquette for the redevelopment of the large parking deck area, located between Quincy and Huron streets.

As at other recent meetings, many attendees were part of a citizens’ group seeking more public input in the process. In November, the group asked the council for two seats on the city’s Lakeshore Drive Redevelopment Committee (LDRC) which is communicating with Veridea, and that the city commit to adding its own public engagement process separate from any conducted by Veridea.

“With a nine-member group or a five-member group, or one individual speaking with Veridea, they understand what those nine people understand or those five people understand,” said citizens’ group member Ben Ciavola. “And without a process for engaging and collecting requirements and desires and needs from the rest of the community, that is all they will ever be able to represent.”

In response to the citizen group’s request, Wednesday the council passed a resolution keeping the current nine-person committee, and committing to open public engagement of the committee’s advice.

During public comment, Dave Bach, organizer of the citizens’ group, asked council members one by one whether they would back the group’s requests.

“They are people that you can go to to talk to regarding your concerns or suggestions,” he said.

As for the second request, Backon said the council would have open discussions regarding anything that affected the community.

Some council members also criticized what they considered an adversarial tone and approach from members of the citizens’ group, and said they were working to be transparent.

“I’m really ticked off that we’re getting treated like we’re a bunch of hoodlums and thieves, and that’s what I think you’ve done to us,” said Councilor Buck Foltz. “…I can guarantee you there will be public input other than Veridea’s, because I’m going to be one of the guys saying we need it.”

Councilor Rachel Lankton pointed to the council’s history of public hearings on large downtown issues such as the pier project and the Shelden Avenue reconstruction, which had been sparsely attended.

Frank Fiala, owner of the 5th & Elm Coffeehouse, presented a letter written by 13 downtown businesses adjacent to the deck. Any development must maintain deck access to those businesses, which were purchased or developed with that access in mind, he said.

Fiala said he was troubled the council’s resolution, which he said gave him the impression that the council would not consider the public’s opinion.

“If that’s the case, then I think what you’re telling me is I might as well go home right now … and I hope that is not the case, because indeed, that is what I would consider an arbitrary and capricious decision,” he said.

Illa Garver, whose Lakeshore Drive home sits between the two decks, presented a petition for a proposal she hopes to get on the May ballot. It would require the city to postpone the sale of the property until the city government, Houghton residents and downtown business owners develop and implement a public decision-making process for the property.

“The only option is to sell it to a developer?” said Garver, who began collecting signatures after the meeting. “There has to be other options.”

Several people also questioned if the parking deck’s status required the city to act so soon. City Manager Eric Waara said the decks, built in 1979, had undergone a structural assessment in 2011. That had spurred a series of repairs to extend their lifespan.

“We bought ourselves some extra time, but it’s going to have to be addressed sooner or later,” he said after the meeting. “If nothing ever happens with any sort of development there, within the next 10 years, we’re going to be looking at a significant investment there.”

Council members and city officials said any sale of the property is still far down the road. A flow chart provided by the city laid out 15 steps leading to the project completion. As of now, the city is in the first and second steps – holding early meetings with Veridea, which will take the committee’s input and developing a rendering. After getting feedback from the public, Veridea would then present a proposal to the LDRC, which could either send it back for revision or recommend it to the council.

In the requests for qualification, where Veridea was one of three developers to apply, Houghton set four criteria. The development has to be an appropriate fit for Houghton, maintain access to existing businesses on Shelden Avenue and Lakeshore Drive, match or increase parking in the area and fill a need in the community.

“They’re going to get public input and come up with what they think’s going to work, based on what they see the landscape is,” Waara said after the meeting. “And when we get that, we’ll look at it, and maybe it’s something we need to talk about collectively … this is very early in the process.” 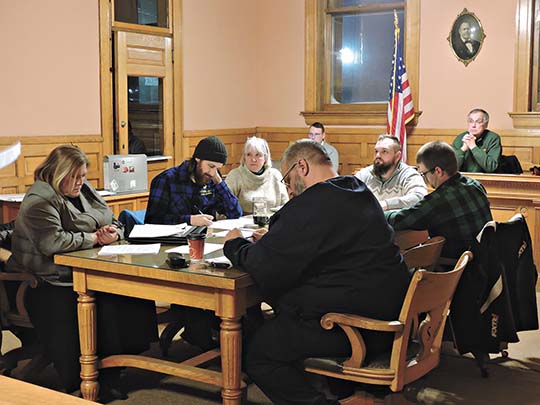