HANCOCK — As the local community descends upon Hancock Saturday to celebrate Heikinpaiva, there is one young lady who has journeyed quite a distance to take part in this mid-winter festival. Twenty-two-year-old Minka Jarvenpaa has traveled more than 4,000 miles to this unique Copper Country event. The native of Turku, Finland, arrived in town last Sunday by invitation of the .

This children’s dance group has been around for more than 15 years and consists of two age groups. The Kivajat dancers are the younger ones with boys and girls in grades three thru sixth. The Loistavat group is made up of middle and high school students. The group practices once a week at the Finnish American Heritage Center in Hancock.

According to the group’s founder and leader, Kay Seppala, Jarvenpaa’s visit this week was made possible by a generous grant from the Finnish American Folk School which aided in her travel costs and related expenses.

“This is the first time we have had a dedicated teacher come and give classes for the children,” said Seppala. “The week has gone fabulous and beyond my expectations.”

Seppala and Jarvenpaa are no strangers. In fact, the two met more than a decade ago in 2009 when the Kivajat group made their first trip to Finland for a week of workshops and performances. Jarvenpaa’s family was a host family in Turku. Jarvenpaa was just 11 years old at the time and the visit from these young Americans left a lasting impression on her. 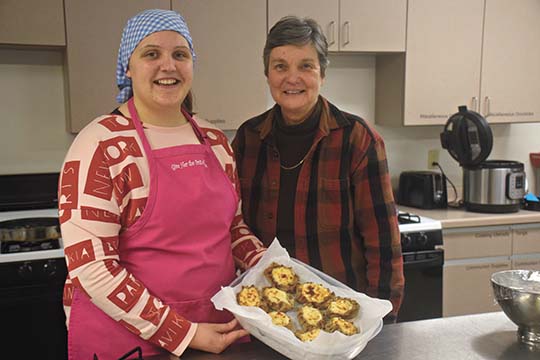 “I was touched by the dedication and seriousness that these kids had in their dancing,” she said.

These two friends met again in 2013. This time it was in Hancock for Finn Fest. Jarvenpaa, who has been dancing since she was seven, came over to learn and perform with her children’s dance group, Vinksin Vonksin. They would connect again in 2015 and most recently in 2019. Both occasions were related to dance trips to Turku and the folk school there.

“I was on a bus this last summer traveling in to town and telling Minka about this grant that was available for a Finnish dance instructor,” explained Seppala. “She quickly responded, ‘I could do it .’ I knew she was a dancer, but did not know she was leader of a children’s group. So we were able to set this up to coincide with our own Heikinpaiva festival.”

Seppala added that one of the benefits of having a real, live dance instructor like Jarvenpaa here is the fact that she can confirm that the Kivajat dancers are on the right track when it comes to authentic children’s folk dancing.

“You can only get so far by watch Finnish dance videos on YouTube,” said Seppala. “Minka and I think very much alike. She understands that there is no use in forcing a dance upon kids no matter how significant it is. She has also confirmed my belief that it is okay to change and adapt dances so that they work for children. Also she is teaching me and others, who are interested in being folk-dance instructors, how to be teachers and pass on these traditions.”

With that in mind, Seppala has kept Jarvenpaa busy over the past week. The week began with the Kivajat and Loistavat groups opening their dance season with a performance at The Bluffs. On Monday, Jarvenpaa led a children’s dance workshop for both groups and the public at large.

“I have been so impressed with the enthusiasm of the people here to learn these dances,” said Jarvenpaa “Especially the children. They are really into it.”

On Wednesday, she was baking traditional Finnish pies at a local church with a group of volunteers. These Karelien pies will be for sale today after the parade in the Tori. As well she will be on the dance floor tonight at the Finnish American Heritage Center and in the Finnish Hymn Sing tomorrow at Zion Lutheran Church. She even found time to snowshoe with a local family.

“I will be dressed in a period costume for the parade,” said Jarvenpaa with a smile. “This has been a great visit. Everyone has been so nice.”

Seppala shared a similar sentiment about her close friend.

“Minka is an incredible resource, and it’s been a real blessing to have her come and share with us.”