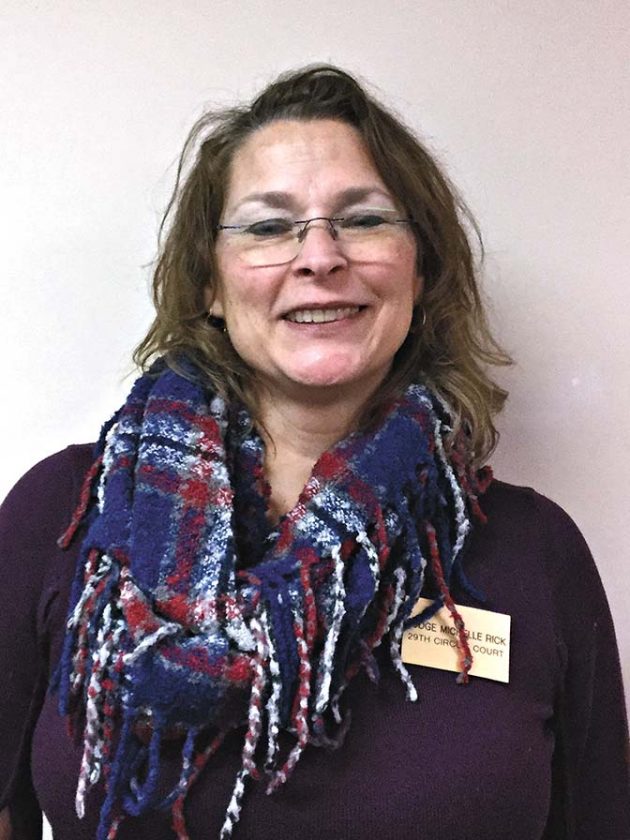 Garrett Neese/Daily Mining Gazette Michigan Court of Appeals candidate Michelle Rick visited the Copper Country Saturday. She has been a judge with the 29th Circuit Court since 2007.

HANCOCK — A candidate for an open Michigan Court of Appeals seat visited the Copper Country Saturday.

Michelle Rick, a candidate for the court’s District 4, spoke with Houghton County Democratic Party members Saturday afternoon. District 4 spans most of the state, including the Upper Peninsula and as far south as Ingham and Livingston counties.

Rick said the Court of Appeals presents a natural transition from her role as circuit court judge.

“This is one way that I can make a broader impact on the work that I’ve done as the circuit judge for two counties,” she said. “I’m excited about the prospect of being part of the system that affects the entire state.”

Rick offered two top priorities as Court of Appeals judge. First, she would like to make the courts more accessible to people without attorneys. She would also like to see the expansion of courts that specialize with people suffering from substance abuse or mental health problems.

“I think there’s some really great opportunities, aside from being an appellate judge who reviews decisions made by trial court judges, to ensure there’s been fairness, due process, and that the laws have been followed,” she said.

To make courts more accessible, Rick has worked on the Limited English Proficiency Committee, which worked to provide interpreters for people who spoke a foreign language. For peole who had trouble affording an attorney, Rick is part of the Limited Scope Representation Work Group at the Michigan Bar Association, which trains lawyers in ways to make their work affordable to people in their community.

Rick has also advocated for the use of polycom technology to allow litigants who might not have trouble getting to court in a particular window of time to participate by phone or videoconference. Some larger communities have programs where people can mediate low-level matters such as traffic tickets via polycom.

“I think that certainly could be expanded to the 4th Judicial District residents, where maybe there’s not the ability to get to court or it’s not convenient to get to court, but you have a matter that needs to be mediated or get resolved,” she said.

“From a judge’s perspective, I have confidence when I see people are bringing in paperwork they’ve completed on that form, because I know it’s good paperwork,” she said.

Rick said treatment courts have done good work in getting people with substance abuse or mental health problems the rehabilitation services they need. But establishing those courts can be dependent on receiving grants, Rick said.

“It might be appropriate for us to have a longer, more detailed discussion on some greater systemic changes so that those kinds of things can be made available to people regardless of where they live,” she said.

Sitting on the appeals court is not about substituting her judgment for the original judge’s, but about applying precedent and legal standards, Rick said.