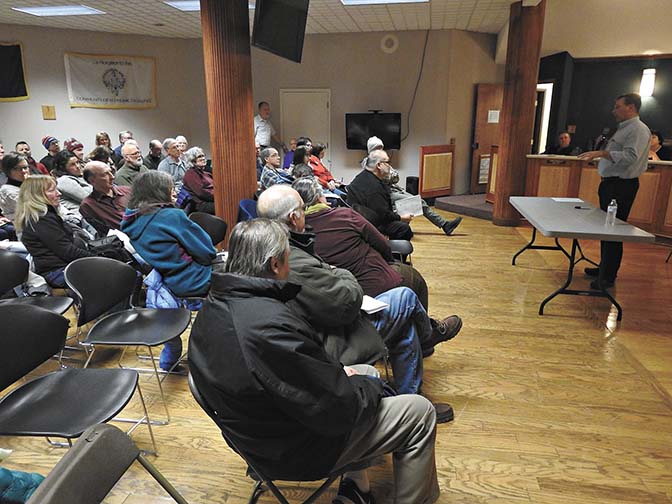 HOUGHTON — In a packed city council chamber Tuesday night, Houghton held an open house to update the public on a proposed redevelopment project on Lakeshore Drive.

In August, the city council voted to enter into negotiations with Marquette-based The Veridea Group for a potential development on the large parking deck area between Quincy and Huron streets.

The city council would have to approve Veridea’s project, at which point the city would agree to sell the property to Veridea.

“It’s nice to have these exchanges … I think being able to look at each other and hear from each other instead of reading things on Facebook (is positive),” City Manager Eric Waara said after the meeting. “Let’s have a conversation.”

Numerous city officials attended Tuesday’s meeting, along with Michele Thomas, director of development for Veridea. Most of residents’ questions Tuesday dealt with the decision-making process going forward, rather than specific suggestions for items to be included, she said.

“Right now, we’re really just focused on getting our due diligence done,” she said. “Getting the parking analysis done, getting the structural analysis of the deck.”

The parking study is expected to be finished by the end of March. Jim Hertel, a member of the The Houghton Waterfront Redevelopment Citizens Group, asked Thomas when Veridea expects to have a proposal ready for the city’s Lakeshore Drive Redevelopment Committee. Thomas estimated it would be sometime this summer.

“I would say that when we get the parking study and structural study back, I would imagine we’ll meet again as a subcommittee and talk through what those said, and we’ll probably hit the bricks,” she said.

Thomas said the development would not necessarily look like what was part of Veridea’s submission for the city’s request for qualifications. However, based on the commonalities of the three proposals, Thomas said, residents can expect some features, such as hotel, retail space and residences.

The development process has been criticized by some residents, who said the city moved too quickly to enter into an agreement with Veridea and want more public input. The Houghton Waterfront Redevelopment Citizens Group has put a non-binding measure on the May ballot that would ask if the sale of the property should be postponed until residents can take part in an open decision-making process about what should go on the property.

Citizens group member Dave Bach asked Waara why the city is measuring growth in terms of development, rather than culture or other forms.

“When you only think of it in terms of economics, that’s just one type of growth,” he said.

Waara said the city needs new development to be sustainable in an era where state revenue sharing is flat. This would be the first new construction downtown in a generation, he said.

“We have to be able to sustain ourselves to provide these services people have become accustomed to,” he said. “Whether it’s city garbage, recycling and well-plowed sidewalks or a mile-and-a-half of park on the waterfront … unfortunately, that’s going to take money.”

After the meeting, Portage Township resident Petra Huentemeyer said she wanted more detail on the timeline for the project development.

She backed one resident’s suggestion to involve a city planner in the discussions.

Also backing the city planner idea was Marilyn Swift of Swift’s Hardware. She was most concerned with preserving parking for her business, which now uses the large deck area on Lakeshore Drive.