Not so fast: Planning commission recommends putting pot on back burner 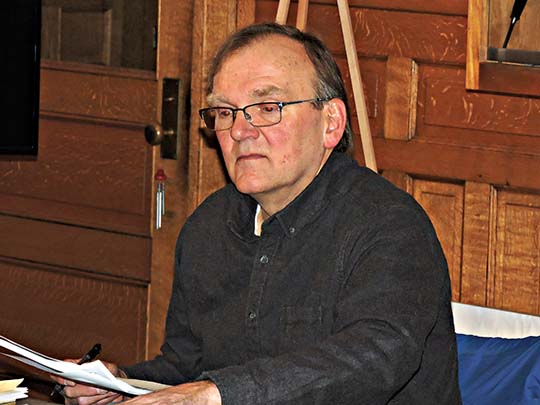 Graham Jaehnig/Daily Mining Gazette Planning Commission member, and Historic District Commission Chairman Chris Green, said the Adult Use Marihuana Ordinance, Ordinance 153, is in violation of zoning ordinances in four of the seven provisions contained in the document. The Calumet Village Planning Commission voted to make the recommendation to the village council to temporarily suspend or repeal the ordinance, until it can be brought into compliance with the zoning ordinances.

CALUMET — The Village Planning Commission last night adopted the recommendation that that the village council temporarily suspend the Medical Marihuana Ordinance Number 152, and the Adult Use Marihuana Ordinance Number 153. Several reasons were discussed, ranging from marijuana not being mentioned in the village’s master plan, to several of the adult use ordinance provisions being in violation of zoning ordinances.

Since Ordinance 153 was adopted, Planning Commission chairwoman Colleen Kobe said several people have asked about requirements pertaining to opening a marijuana business within village limits. But because there is no mention of it in either the master plan or the zoning ordinances, the way forward is unclear. In fact, the one application the village received was subsequently withdrawn over ambiguities.

There is some question regarding the processes involved in the actions required by business owners, she said.

“If you’ve looked at any of the steps involved in making a marijuana business,” she told the committee, “you will know that there is a lot of paper work, red tape and hoops to jump through.”

After close study of the adult use ordinance, she said, there are recommendations to correct the problems created by the ordinances, she said.

Other issues discussed included zoning ordinance violations contained in the adult use ordinance.

Committee member and Historic District Commission Chairman, Chris Green said that there are seven different types of marijuana operations included in the ordinance that will be permitted in the business district, that need to be addressed.

“So, the ordinance lists seven different types of operations that are going to be allowed by this ordinance,” said Green. “Two of those, temporary event organizer, designated consumption establishments, your cigar bars — this ordinance says, ‘Okay, we’re gonna go with with those.’ The state has yet to adopt any rules regarding these.”

Ordinance 153, he continued, allows for processing facilities, such as testing and compliance, transport, growing, to be located in the business district, is not permitted under the zoning ordinances.

“But then we have all of these — three other types of facilities that the way the ordinance is written, it’s allowed anywhere in the village, except in the residential district. And yet, we have a zoning ordinance that says we have a downtown commercial district that we want to reserve for retailers. And so, these other types of facilities that are not retail operations should have never been allowed in the downtown district. And that is the fundamental complaint that I have, and I will say the marijuana ordinance is defective, for lack of a better term, is that as written, this ordinance is not compatible with the zoning ordinance. And, it needs to be compatible.”

“You cannot write any new ordinance, then say, ‘Well, we’re going to change the zoning;’ it’s not permitted by State Law,” he said.

Until the zoning ordinance is changed, argued Green, there is going to continue to be confusion.

“The marijuana ordinance says yes, this is allowed, and the zoning ordinance specifically says it’s prohibited.”

Commission member and Village President Dave Geisler said he understood the issues raised, but did not feel the council would agree to the repeal, because its members already voted on it 5-2, but he would second the motion to temporarily suspend the medical and adult use marijuana ordinances until the issues they created can be resolved.