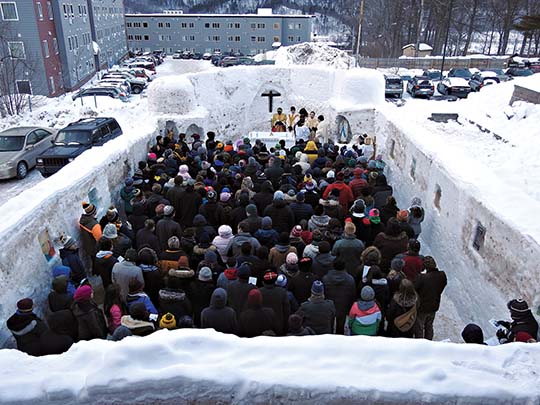 The congregation laughed. Where they worshipped Friday night, there were no pews — or a ceiling, for that matter.

About 200 people packed in for the first of St. Albert the Great University Parish’s annual Ice Masses Friday night. This was the fifth year for the chapel, built next to the church.

The church also builds an all-nighter statue for Winter Carnival, for which it claimed the top prize. But the chapel is its biggest project. Over three weeks and about 10 build sessions, church members build a place of worship large enough to handle the crowd.

“It’s a way of taking what Michigan Tech loves, the statue building and everything, and bringing Catholic mass into it,” said Dustin Larson, associate pastor at St. Albert.

Each year, the church adds something new. The ice chapel this year boasted stained-glass windows of ice, and the inside back wall of the church bore a mural. For the first time this year, the ice chapel also hosted a confessional Friday afternoon.

“The carved-out ice pulpit has been very fun to preach from,” said Larson, who read the homily.

People had come from at least as far away as Iron Mountain for the mass, Larson said.

After Friday’s first Mass, the bundled crowd swarmed inside for chili and hot chocolate.

This was the first Ice Mass first-year biomedical engineering student Kamila Staniszeswki had gotten to see.

“It was a lot of fun, everyone together outside,” she said. “It’s just a different experience.”

A candlelight Mass followed at 10 p.m. Friday, with the final mass in the ice chapel held Saturday morning.