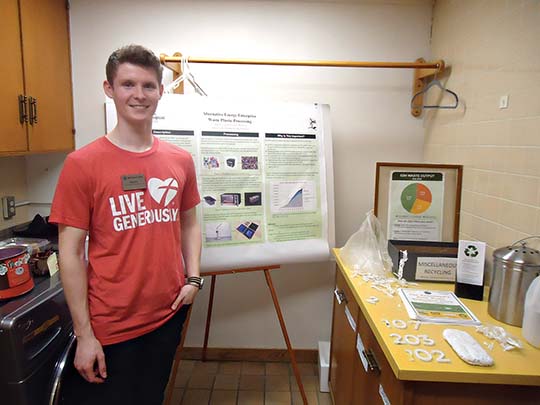 Jon Jaehnig / For the Gazette DMH Resident Matt Reich explains how recycling can be as simple as rinsing and sorting waste products or as creative as shredding and melting milk bottles to create reusable high-density plastics.

The house, which is lived in by five students, is outfitted with sustainable living features, including solar panels and energy efficient appliances. The goal of the house is to research how existing homes can be made more energy efficient through technological advances and lifestyle changes on the part of household members.

“I find it very motivating to live in a sustainability house,” said SDH resident Lexi Steve. “Our common goal is to move toward sustainability, and to help the public to do that as well.”

During the open house, residents and other volunteers gave presentations on general energy usage and waste output, how these elements are being managed within the house, and steps that the general public can take to reduce their own energy use and waste output. Ideas presented included buying energy-efficient lightbulbs and appliances, recycling and composting, investing in solar energy, and using “smart appliances.”

“If I’m on campus and check my app and see that I left the light on at home when I left in the morning,” said DMH resident Rose Turner. “I can turn it off from my phone,.”

Turner also stressed that, like many sustainability measures, reducing energy usage is not only environmentally responsible but economically responsible as well because the Western Upper Peninsula has some of the highest energy rates in the country.

“UPPCO has a monopoly up here, so they can pretty much charge pretty much whatever they want,” she said.

In addition to her presentation, Turner invited attendees to play a game in which they attempt to order household appliances by how much energy they use in a typical week. A pamphlet explained that while energy efficient bulbs can cost as much as eight times what conventional bulbs cost, energy efficient bulbs can lead to enough energy savings to more than pay off the bulb in less than six months.

Residents do not only try to reduce the amount of energy that the house consumes, they also try to change where that energy comes from. While some of the U.P.’s energy comes from hydroelectric sources, most electricity still comes from burning coal “a practice which is hazardous to the environment.” The SDH does still rely on the power grid, but more than half of their energy comes from solar panels. With additional batteries, the SDH may one day be able to run entirely on solar panels.

One demonstration was given on collecting solar energy, and another on storing it. The SDH was limited by the amount of land that they were allotted by MTU, the fact that their solar panels are across a highway, and other factors. As a result, their solar array cost over $25,000 to implement and will take over 14 years to pay off. However, a home that did not have these limitations could pay off a solar array in under a decade, depending on factors like the size and age of the home.

House residents also explained how the average household can reduce their waste output by recycling paper, cardboard, plastic and glass, and by composting things like kitchen waste. Because putting out trash requires buying bags from the city but recycling and composting are free in Houghton and Hancock, finding alternatives to sending waste to the landfill is environmentally and economically friendly.

Students living in the SDH are “expected to commit about five hours per week for their sustainability commitment,” according to the house’s website. These commitments, also according to the website, include cleaning solar panels, monitoring the compost process, and other “special projects.”

While the next SDH open house has yet to be scheduled, there will be another opportunity to see the house before the end of the current semester.

For more information about how you can implement more sustainable practices in your home, visit mtu.edu/sustainability/.