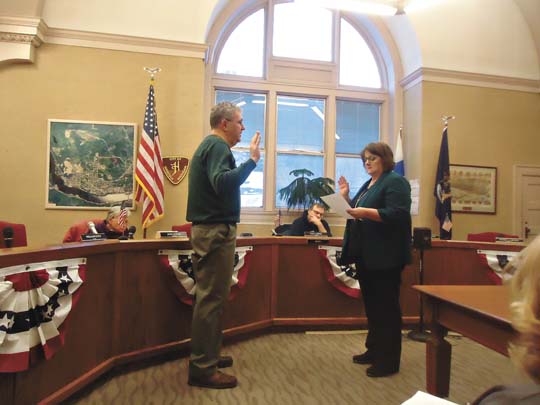 Jon Jaehnig/For the Gazette Former Hancock mayor John Haeussler was appointed from five applicants to fill a vacant seat on the Hancock City Council during a personnel meeting Wednesday evening. Haeussler had stepped down as mayor in the summer citing health reasons but says that he now has a clean bill of health and wants to give back to the city. Haeussler is filling the seat of former councilor Stephanie Tubman, who stepped down last month for personal reasons.

HANCOCK — The Hancock City Council held a special personnel meeting on Wednesday. The meeting saw the appointment of John Haeussler to fill the council seat that had been left vacant by counselor Stephanie Tubman who stepped down last month for personal reasons.

Tubman had been appointed in June to fill a vacant seat left when Haussler stepped down for health reasons. Haeussler, then mayor, was replaced in that capacity by current mayor Paul LaBine.

“As we all know, unfortunately councilor Tubman had to step down,” said LaBine.

Because the vacant seat was for an at large position, any registered voter living within the city was able to apply. Notification went out after the council’s regular February meeting when Tubman’s resignation was officially accepted by the council. Five applicants applied for the position.

“I’ve looked through these quite a bit, and they all have strengths and merit,” said LaBine.

LaBine invited comments from other councilors before giving his recommendation.

“I think that with some of the things that have been happening John (Haeussler) would be a good fit,” said Councilor Ron Blau.

Councilor John Slivon said that he had not seen the applications. While he read them during the course of the discussion, he declined to give his opinion on the applicants.

“(Blau has) some valid points but I think that I would like to see some diversity,” said Councilor Whitney Warstler. “Suzanne (Peters), as a lawyer, would bring some unique perspectives.

Councilor Daniel Seguin was absent from the meeting and Councilor William Lytle attended remotely via a video link. While he was active in the conversation, councilors are not able to vote remotely.

LaBine eventually recommended that the council appoint Haeussler, although he also expressed some concerns regarding Haeussler’s health.

“As you know, I resigned last summer following two heart attacks in June,” Haeussler told the council. “I don’t recommend heart attacks as a way to get healthy … but I’ve made lifestyle changes and have a clean bill of health. I’m ready to give my time back to the city in any way I can.”

“All seven members of the council need to work together to do what the feel is best for the city,” said Haeussler. “I have a track record of being a strong advocate.”

Blau made the motion to appoint Haeussler with Slivon seconding and none present opposing. Haeussler was sworn in by Acting City Manager Marry Babcock.