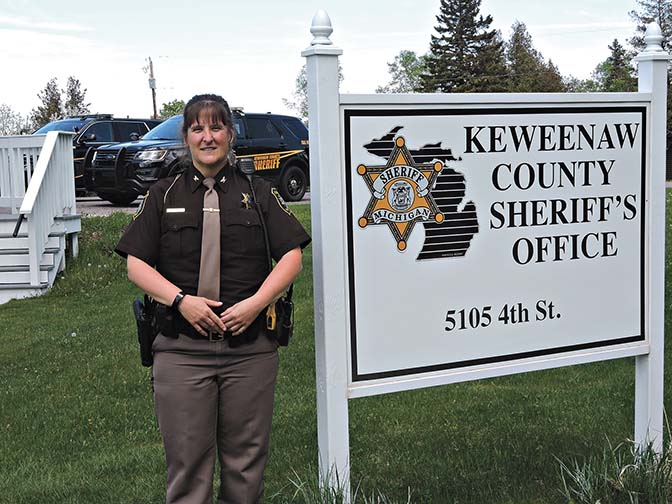 EAGLE RIVER — Tonya Stefonich is the Keweenaw County Undersheriff, as of May 16. Stefonich received her promotion when Curt Pennala was appointed to fill Sheriff Bill Luokkanen’s position, after Luokkanen retired on May 15.

Stefonich said she will observe her 15th anniversary on May 29.

After graduating from the police academy, said Stefonich, she went to work with the Laurium Village Police Department when she was hired by then Chief P.J. Baroni. She then worked briefly as a Keweenaw County Deputy, having been hired by then Sheriff Ron Lahti, before accepting the Chief of Police of Lake Linden position in June, 2010. In January, 2017, she again became a Keweenaw Sheriff’s Deputy, when she was hired by Luokkanen.

Since she was promoted to undersheriff on May 16, 2020, her duties have become more administrative, but having been previously in an administrative position, Stefonich said her transition has been smooth.

Pennala said he is pleased to have someone of Stefonich as his undersheriff.

“Undersheriff Stefonich has demonstrated throughout her career her ability as a leader, and she still has a steadfast enthusiasm for the job,” Pennala said. “She also has a pragmatic approach to law enforcement, which I really like.”

Pennala added that Stefonich is a respected law enforcement officer within his office, and by all other area departments.

“She is a great investigator,” said Pennala, “and has an unwavering commitment to law enforcement as a whole.”