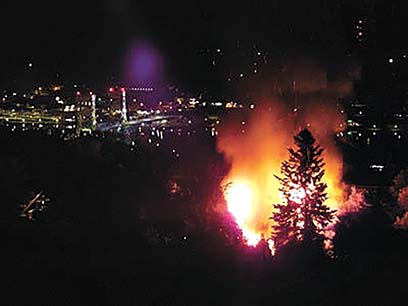 Photo courtesy of Keith Niemela Flames light up the night sky as fire completely engulfs a home on Sampson Street in Franklin Township.

FRANKLIN TOWNSHIP — Multiple fire departments responded to an early Sunday structure fire destroyed a house on Sampson Street in Franklin Township, according to a June 28 release from the Houghton County Sheriff’s Department.

Deputies assisted on the scene of the blaze, at which no injuries were reported.

Fire Departments from Quincy, Franklin and Hancock Township assisted the City of Hancock Fire Department at the blaze, which was reported at 3:20 a.m. Sunday, the release stated.

Monies from the Pigs and Heat Fund will be used to assist the owner.