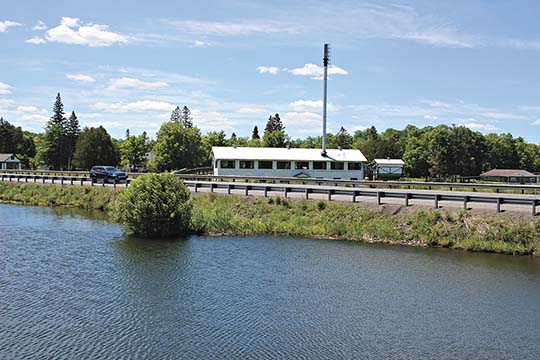 Joshua Vissers/Daily Mining Gazette Inspectors report the Ford Dam is largely in good shape, but have recommended the removal of a bush growing out of the vertical drain, seen here in the foreground.

In their 2006 report, engineers gave the Ford Dam a very positive review.

“The overall condition of the earthen dam appears to be good,” the report concluded.

It noted the high hazard potential of the dam, with U.S. 41 and a fiber optic cable run along the crest at risk of being washed out, and the Michigan Tech Forestry Center is danger of being flooded, but with a recently upgraded spillway (courtesy of the Michigan Department of Transportation in 2005), the inspector found the design, stability and maintenance of the dam adequate.

“…the reservoir’s main spillway and impoundment have adequate capacity to discharge and/or impound the Q200 (200-year flood) peak flow,” the inspector stated.

Several years and inspections later, the 2018 inspection report found that the dam continued to be stable and in good condition, but recommended a few maintenance issues be resolved by the owner, Michigan Technological University.

The inlet structure for the spillway – a vertical pipe with a metal cage to catch debris – had collected various logs and debris around it, and a bush had grown out of the collection.

“The root system of the bush substantially covered the top of the inlet pipe upstream of the stoplogs,” the report said.

In addition, several animal burrows and woody vegetation were found on the dam embankment, which can weaken the structure over time and create seepage paths for water. The overflow culvert, located at the north end of the embankment, was also significantly overgrown.

In 2020, while animal burrows and woody vegetation are not apparent, the bush can still be seen growing from the upstream edge of the spillway’s inlet pipe.

Debris or living vegetation in the spillway can significantly reduce the discharge rate of the dam, typically calculated based on a clean and well-maintained spillway. A lower discharge rate could mean the dam is more likely to be over-topped with water.

The Ford Dam was originally constructed in 1936 to provide water for the nearby lumber mills.