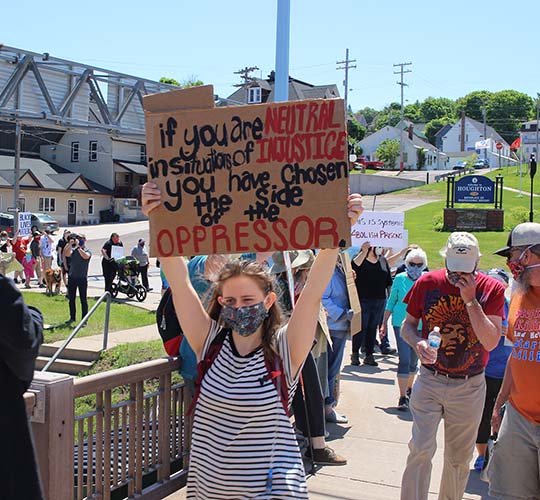 Joshua Vissers/Daily Mining Gazette A peaceful, masked protestor holds high her sign called for an end to oppression of African Americans by law enforcement during a march Wednesday in Houghton.

HOUGHTON — More than 1,000 people of all ages gathered on the city of Houghton’s upper parking deck Wednesday for a demonstration march along Shelden Street, across the bridge to Hancock, then back, an unprecedented turnout for the Copper Country, according to police. Chanting “Black Lives Matter,” and “no peace,” the marchers reflected other peaceful displays of support for Minneapolis resident George Floyd, who was slain while in the custody of Minneapolis Police last week.

King said that if she is pulled over by the police for speeding, she should receive no better treatment for being a 60-year-old white woman than should a 19-year-old “black kid.”

Law enforcement agents act as though they have a license to kill, she said, adding that among the issues making Americans feel uneasy is the number of police agencies possessing military-grade weapons and equipment.

“And they will use it,” said King. “I was on Facebook yesterday and I said: ‘If I lived in the city, I would be going elbow to elbow with a bunch of other grandmas, saying you have have to come through us before you hurt anybody,’ and make it embarrassing.”

A lot of people have cameras now, she said, and the public is finding out that the people wielding the sledgehammers to break into buildings are white people.

“So, someone is inciting the riots,” she said, “and enabling the riots, and it’s not people of color. You don’t get Indiana license plates from Lansing, when it’s a Michigan uprising.”

King said she did not know if the event was a march or a protest, but for her it was a demonstration.

King said that she did not feel the demonstration was aimed at local police, but at the system in general. It is difficult for many to travel to the larger Midwestern cities, she said.

“So, we have to do it up here, in the U.P.,” said King, “because this is where we are. We don’t have a choice. And I think it’s scaring the pants off some people who suddenly feel that it’s necessary that it’s okay to use military force against people recognizing their First Amendment Rights.”

Houghton County Sheriff, Brian McLean, was present for the beginning of the march, and said his department was hoping for a nice, friendly protest march.

“We’re here to support everybody and keep everybody safe,” said McLean. “That’s what we’re looking for.”

“I’m thinking that we’re going to have a safe walk,” Butler said, “and we’re going to get these folks across the bridge, both ways, and it’s going to be a great day for everybody.”

While the march was indeed peaceful, it was well organized, as the walkers kept safe and orderly. Before the march began, one of the organizers used a megaphone to address the large gathering, informing them that she had extra signs in her vehicle in case anyone wanted one, and there were bottles of water available for those who wanted refreshment.

She told the marchers there would be brief breaks on the bridge along the march, so people can read the signs as they drive by.

“Thank you so much for all of this,” she said in response to applause, “but I would not like the spotlight to be on me today. I would like it to be on all the voices that are unheard throughout America, and I would just like to bring everyone together and talk about all the issues.”

Stay safe while gathering during the holiday weekend and summer events