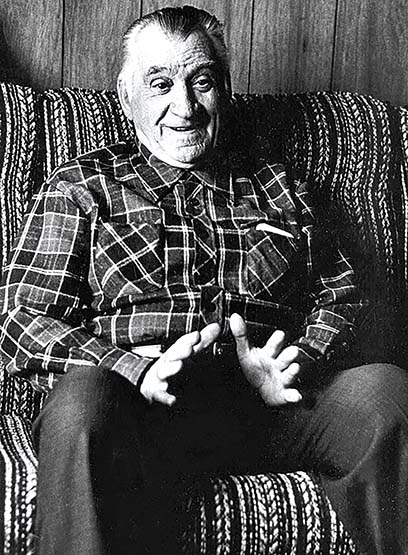 EAGLE RIVER — The May 28 edition of the Daily Mining Gazette contained two articles that discussed the new Keweenaw County Sheriff and the new undersheriff. To fulfill their duties to the residents of Keweenaw County, the Sheriff’s Office relies on a full staff of deputies capable of criminal investigation and traffic enforcement. The department also has a K9 unit for trafficking, search, education and drug enforcement. The department also has Marine, ORV and Snowmobile divisions, as well as first responder medical services. But that has not always been the case. Each desk has a telephone, a radio, computers, internet, and software the average person would know nothing about.

When Houghton County native, Theodore Rogers became the Keweenaw County Sheriff in 1949, he had none of today’s technology to rely on. He was not issued so much as a uniform. He was not given a county vehicle to use, either. He was paid $150 per month, and given a billy club.

In an Aug. 7, 1974, recorded interview with Dorias Helgren and Larry Harju, Rogers disclosed several details of law enforcement in the mid-20th century. The interview was part of the Finnish Folklore and Social Change in the Great Lakes Mining Region Oral History Project, between 1972-78, which is housed in the Finnish American Historical Archive and Museum in the Finnish-American Heritage Center of Finlandia University, in Hancock.

Rogers told Helgren and Harju that when he was appointed sheriff, he owned a 1936 Chrysler, which the county expected him to use for police business. He was reimbursed 5 cents per mile during official use. He was, however, provided with a red light that was placed on the vehicle’s fender. The department did not have two-way radios for communication. When Rogers was on duty, his wife answered in-coming telephone calls.

“…I mean when there was no two-way radio, she used to call somebody where she thought I’d be going by and they’d come out and stop you,” Rogers said. “If you were going by Savalinen’s gas station, he’d come out the door and wave to you, and then you’d turn in there.”

Rogers could not recall if the year was 1957 or 1958 when the county received a grant from the Civil Defense under the Federal Government for a radio set for communication. In Rogers’ case, communication was with his wife, who was his dispatcher.

Whereas today, the Keweenaw County Sheriff, Curt Pennala, can rely on his deputies for backup when needed, that would have been a luxury to Rogers.

“The first paid deputy we had was in “66-67,” Rogers told his interviewers. “Before that, you had a few men you could call during the night, if they weren’t working, to help you out or something like that, when you had to pick up somebody mental or something like that; you’d call a man and he’s come with you.”

During the interview, conversation turned to sets of books that are long lost today. Among them was “the Jail Records Book,” containing the names of everyone who had served time in the county jail. Included with the name was the person’s sex, ages, birth place, “social condition,” residence, occupation, education, why he or she was arrested, and so forth. The record contained information on a twelve-year-old boy from Eagle Harbor in 1890 who was arrested and tried for murder.

The record books are missing, and have been for years, but no one associated with the jail or the Sheriff’s Office when they disappeared or what happened to them. One of the books discussed during the interview was begun in 1874, which at the time of the interview, would have been 100 years.

As Rogers said during the interview: “There is a lot of history in here, you bet there is.”

Sadly, that history is lost.