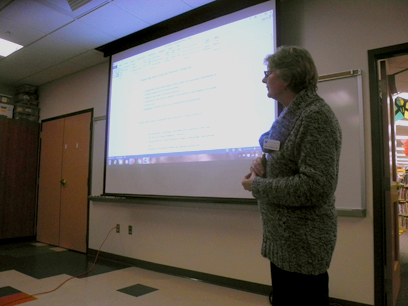 Garrett Neese/Daily Mining Gazette Barry Fink of the Copper Country League of Women Voters gives a presentation on the electoral college and the National Popular Vote bill. The league is in favor of moving to a direct popular vote for president.

HOUGHTON – When the League of Women Voters first took a position in favor of eliminating the electoral college, there hadn’t been a divergence between the electoral and popular vote winners in nearly 80 years.

With two such occurrences in the past 16 years, the issue has gained fresh relevance amid calls for amendments or other measures to determine the president by popular vote.

Barry Fink of the Copper Country League of Women Voters gave a presentation on the college and a national compact in which states would agree to give their electoral votes to the popular vote winner.

The electoral college was established in Article 2, Section 1 of the Constitution as a compromise between a popular vote and the selection of the president by Congress. After the presidential election, a number of electors equal to the state’s federal representatives meets to vote. Originally, the vote was for two candidates, only one of which could be from the electors’ home state; the 12th Amendment changed that to a vote for a president and vice president.

Concerns at the time included smaller states concerned their powers would be overrun by larger states, as well as southern states worried they would become outnumbered by the population of non-slave states. The Founders also touted the electoral college’s position as a failsafe if the popular vote winner was unsuitable for office.

By putting the final decision in the hands of eminent people, Alexander Hamilton wrote in Federalist Papers No. 68, the presidency will “never fall to the lot of any man who is not in an eminent degree endowed with the requisite qualifications.”

“The electors were intended to be the most knowledgeable and informed people in the country, and then they would make the selection of the best person based on their merit and not with regard to the colony or the state from which they came,” Fink said.

By tradition, electors vote for the ticket that won the state’s popular vote. Since 1788, only 157 electors have voted for a different candidate. The largest impact of rogue electors came in 1836, when Virginia’s delegates refused to vote for Martin Van Buren’s vice-presidential candidate, Richard Johnson; the U.S. Senate eventually selected him anyway. So far this year, an elector in Texas has pledged not to vote for Donald Trump, who won the state’s popular vote.

The League of Women Voters voted in favor of eliminating the electoral college in 1970.

“The League believes in the one-person, one-vote principle, and the college does that conform to that,” Fink said.

In 2010, the League also adopted a position in support of the National Popular Vote compact. However, Fink said, the League was clear that it supported the proposal as a step towards eliminating the college.

As of Friday, Hillary Clinton had a lead of more than 2.7 million votes and 1.9 percent over Donald Trump – the largest lead of any electoral college loser in raw numbers and third by percentage.

Four other people have lost the election while receiving the most popular votes.

• Andrew Jackson, who received the most popular and electoral votes – though not a majority – of either – lost out in 1824 when the U.S. House of Representatives picked John Quincy Adams; his popular vote lead of 10.4 percent is the largest of any loser.

• Samuel Tilden, the popular vote winner in 1876, lost by one electoral vote in an arrangement that gave disputed electoral votes to Rutherford B. Hayes in exchange for the end of Reconstruction in the South.

• Incumbent President Grover Cleveland lost to Benjamin Harrison in 1888 despite winning the popular vote by more than 5.4 million.

• In 2000, Al Gore received about 543,000 more votes than George Bush, whose electoral lead was finalized after a Supreme Court decision to halt a recount in Florida, where Bush held a 537-vote lead.