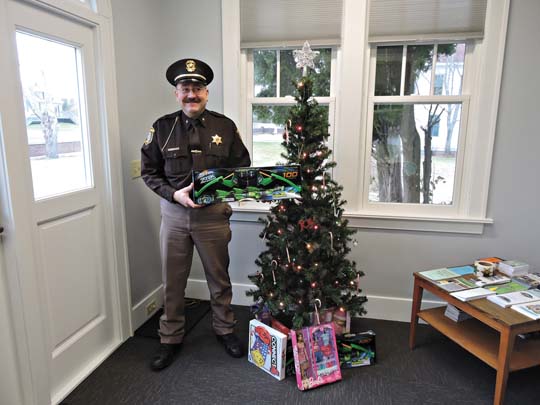 Graham Jaehnig/Daily Mining Gazette Keweenaw County Sheriff Bill Luokkanen and his department are coordinating the 20th annual No Kid Without a Christmas drive, and are asking anyone interested to donate unwrapped toys, clothing, or monetary gifts.

“Last year, more than 40 families were helped through this program,” said Luokkanen, “and I can’t even tell you how many kids were helped. In generalities, I just say dozens and dozens.”

Because some people have unique needs, monetary donations are always very appreciated and welcome, Luokkanen said.

“Especially older children,” he said. “What’ll happen is everybody likes to buy toys for young kids, but a lot of times, the older children will get kind of left out. So, the elves over at the courthouse and I do a bit of shopping every year to make up that difference, and that’s where the monetary donations really help.”

Luokkanen said that his office just recently received a list of families in need from one of the department’s community partners, but that is just one list.

“We don’t even know how many kids or families need help, because some people come in at the last minute,” he added.

Last year, The Superior National Bank in Mohawk and Aspirius Keweenaw Hospital in Calumet were the remote drop-off points for donations, but this year, the The Upper Great Lakes Family Health Center on Calumet Avenue and the Gay Bar have become drop-off points as well, along with the Sheriff’s Office.

“We usually do pretty good on the toys, but winter jackets, hats, gloves, mittens, those things, are welcome, too.”

Loukkanen said he understands it can be difficult for people wanting to donate to know what to offer to the program.

“It’s not like people are being deliberately mean,” he said, “but you might have four of five kids in a family, three younger ones and two older ones, and you don’t want anyone left behind.”

“I’d like to thank everyone who has helped out and contributed throughout the years,” Luokkanen said. “Every year dozens of families, and hundreds of kids are helped by this program, and we want to continue it and make the 20th year our biggest and best yet.”

Anyone wanting to donate items or cash can call the Keweenaw County Sheriff’s office at (906) 337-0582, or can send monetary donations to the office at

“We’re helping our less fortunate Keweenaw families who can’t afford the kind of Christmas that maybe we had when we were kids, and we want to make sure that they get that.”

The deadline for donating items is Dec. 14, he said, which allow time for the wrapping of gifts.